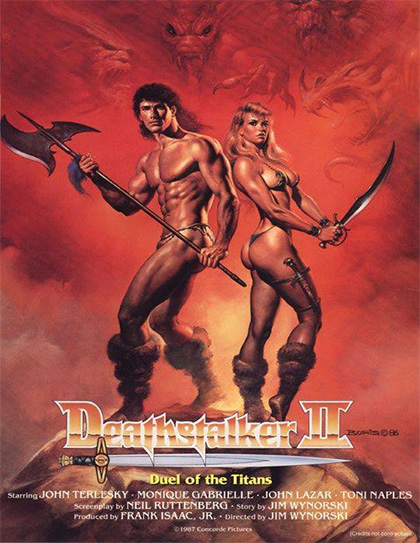 The Deathstalker definitely stopped lifting his weights before this sword and sorcery sequel. Deathstalker II cast a better male lead in actor John Terlesky. The soon to be classic film franchise went from a more buff, Conan the Barbarian Beastmaster character to Indiana Jones and the Prince of Thieves. While Deathstalker Terlesky has far more charisma and acting talents than his predecessor, I did miss the woman beating brute the original character provided. Slim and trim Deathstalker on the other hand got beat down for several rounds by GLOW wrestler Matilda the Hun. I guess it’s harder to beat on a woman when you’re half her size. Deathstalker 2.0 saved the women, then didn’t take advantage of them, even as she threw herself at him. That’s not my Deathstalker!

The original, took itself more seriously. It provided a multitude of laughs but they were mostly unintentional. Deathstalker II didn’t care to make fun of itself. In fact it was so far over the top, it went from an action/fantasy to a straight comedy. Don’t worry though, the sequel may not have the attempted Shakespearian dialogue but it still has the corny lines, overabundance of voiceovers, skin flick sex scenes, choreographed fighting sequences and enough midget to fulfill any Deathstalker fan’s needs. My personal favorite line came during an intimate scene. Princess Evie said, “I could just eat you alive.” The Deathstalker responded, “Bones and everything?” Instant classic.

The real treasure of Deathstalker II for me was the lead actress Monique Gabrielle’s performance of Reena the Seer. Her delivery of every line is so awful, adorable and absolutely fantastic. I can’t think of a more enjoyable bad performance. Just knocking on the door to the tomb repeatedly calling for “Stalker” was hilarious. This is possibly my all-time favorite “good/bad” performance by a leading lady. May I say, ***spoiler alert*** Princess Evie’s death scene was possibly the best death scene ever in film.

I also enjoyed the lineup of hired hands, brought in to take the Deathstalker out. Including each of their deaths. In particular Buddy “Footstool” LaRosa made my day in his life and his death. There’s also a glowing green graveyard that’s absolutely amazing. A zombie movie with a graveyard that bright needs to be made. They did miss out on the opportunity to have Zombie “Footstool” LaRosa make an appearance. What can I say, no movie is perfect.

Though I missed some of the aspects of the original Deathstalker, part two may very well be the epitome of 1980’s campy cheese skin flicks. It’s bad. It’s enjoyably bad.

Deathstalker 2: mentioned on this episode of Without Your Head by Jeremy Gillespie & Steven Kostanski, creators of “The Void”.