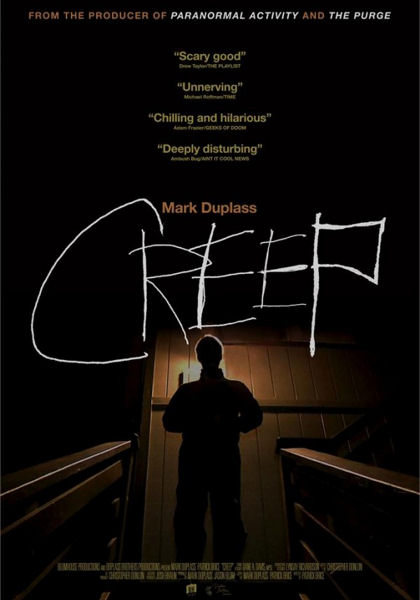 The dangers of Craigslist are more volatile than whatever product you’re buying being broke or whatever girl you’re hooking up with giving you a STD. The dangers of Craiglist didn’t die with the capture or suicide of the “Craigslist Killer”. Independent filmmaker Aaron (Patrick Brice) is on his way to answer a Craigslist ad for a job offer. Josef (Mark Duplass) is terminally ill and wants to document his life for his son to see when he’s older. Aaron follows Josef with his camera on, documenting wherever he goes. An inside view of a strangers life proves to be an adventure of a lifetime. Josef doesn’t just want a paid cameraman, he wants a friend. When the job ends, Josef still wants a friend, just as the wolf befriends the rabbit. Don’t be afraid of the big, bad wolf.

What happens when two actors get together to make their own movie? Mark Duplass and Patrick Brice write, direct and star in their own creepy movie. Craigslist connects a cameraman to a Creep in a first person film with basically a cast of two. It has to be the absolute cheapest way to make a movie. The documentary style filmmaking isn’t always the best looking. Sound proves to be equal to a documentary as well. Production values are two actors and their camera. It is story and performance based in a character study of a fake personality and his hired hand that generally stays creeped out.

A borderline comedy, Mark Duplass makes this film with an off kilter, fun performance. Never sure exactly what’s going on, or even if you’re watching a black comedy or straight horror, a slow build is kept intriguing. This feature could have been cut short when the pair separate and filming focuses on Aaron. While the mental game is fun and I enjoy the hell out of the tubby dream, Duplass is where the entertainment is. The payoff in the finale makes the hour and a half wait well worth it.