AVAILABLE TODAY ON iTUNES!
"Matthew McConaughey is on fire in KILLER JOE, fierce and ferociously funny." 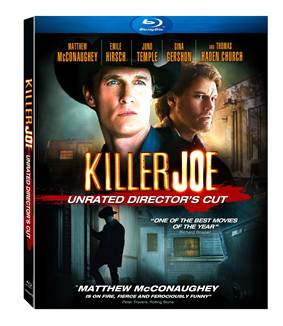 The Unrated Director's Cut of the film will be available on Blu-ray Disc and DVD. There will also be an R-rated DVD version. The Blu-ray and DVD bonus materials will include a behind-the-scenes featurette plus the Director intro and Cast Q&A from SXSW. The Unrated Director's Cut will also feature an audio commentary with Director William Friedkin. The Killer Joe Blu-ray Disc and DVD will be available for the suggested retail price of $24.99 and $19.98, respectively.

Killer Joe Cooper (McConaughey) is a Dallas detective who doubles as a hit man with the charm of a southern gentleman. Chris (Hirsch) hires Joe to kill his mother in order to collect her life insurance and pay off his debts. Unable to pay for the service upfront Joe takes Chris' sister Dottie (Temple) as a retainer until he can be paid.