TYPHOON FILMS TO RELEASE THE KILLING GAMES APRIL 22nd.
(Edmonton) April 14th, 2014 Typhoon Films has announced that THE KILLING GAMES will be released worldwide on Apple Itunes, Google Play and other outlets on April 22nd, 2014. The feature film had its Worldwide Premiere at the Calgary International Film Festival, and it's U.S. Premiere in San Francisco at Another Hole In The Head Film Festival. It's last stop on the circuit was at Shock Stock Horror Convention
in London, Ontario this past weekend.

THE KILLING GAMES ran into its first hurdle when the Edmonton International Film Festival Chairman
told Director Barry J. Gillis that the movie was too violent for their film festival. Gillis battled with the film festival to screen the movie, but to no avail. It was a bitter pill to swallow, and Gillis went public with his displeasure, which in turn led one of the festival organizers to tip off other festivals in a private film festival Facebook group to blacklist Gillis and his movie.

Despite the backlash from various festival organizers, Bruce Fletcher programmer with the Calgary International Film Festival requested a screener, and loved the movie so much, that the movie had a very successful debut in Calgary in front of a wild group of genre fans who thoroughly enjoyed the
movie. THE KILLING GAMES has since put crowds into a frenzy wherever it has screened.

THE KILLING GAMES opens with a scene where a teenage girl Elysia (Yunona Anders) accidentally witnesses a sadistic killing by sociopathic serial killers Son of Satan, (Edwin Autridge) and Dirty Jesus (John Scott), who, once they finish their work, spot the girl and give chase. Meanwhile, Elysia's dad, the world-weary Birdman (Kelly A.H. Bird) is at home caring for his invalid wife. When Elysia doesn't come
home at the usual time, Birdman begins to worry about the whereabouts of his daughter.

Not far away is a roving gang of criminals headed by Alex (Alex Sharpe), with their fingers in all sorts of vague illegal pies, including drug dealing and armed robbery. But after a growly-voiced henchman (Toby S. Krekoski) botches a stick-up job that results in multiple murders, Alex suggests they head off to see an old friend he hasn't seen in years, to lay low for awhile. Soon an ill fated confrontation leads to a bloody, and most unforgettable climax.

THE KILLING GAMES can be Pre-ordered right now on Apple Itunes at the following link. 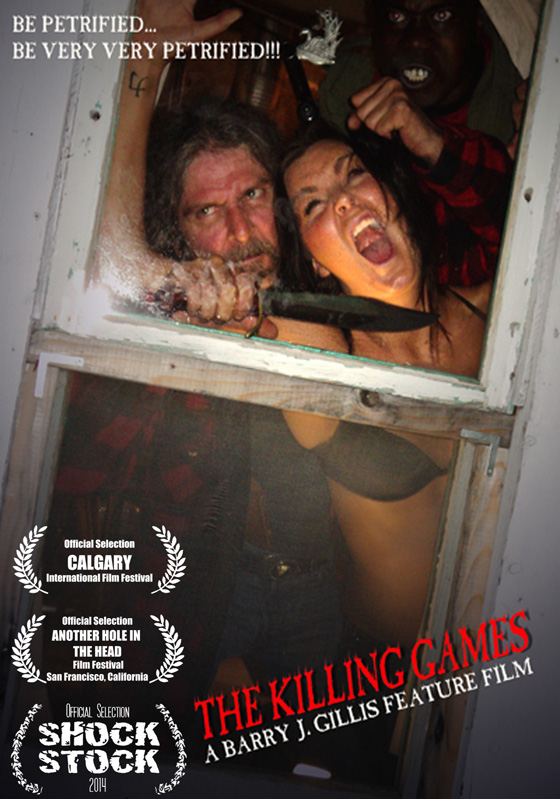