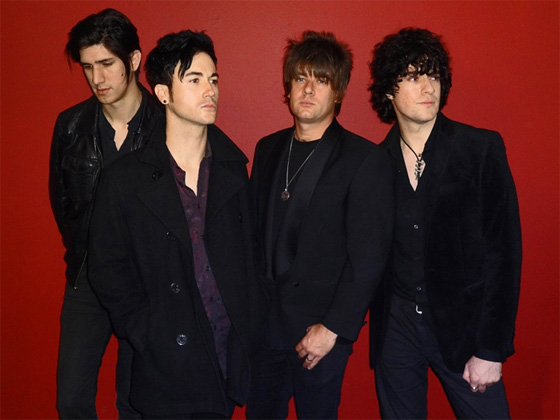 " "I will corrupt you!" proclaims the chorus of Feral Children, the lead single from the band's latest Acetate Records release, Bless This Mess. Don't panic, it's not quite the end of civilization just yet, but we should prepare for the pending onslaught of Prima Donna's 2012-13 World Tour, which will take them just about everywhere on earth.

One of modern music's hardest working bands, touring until the van explodes is nothing new to these guys. 2011 saw them tour the West Coast with DGeneration, take part in South By Southwest, co-headline both the first Experience NoHo Festival in Los Angeles and the Sound Festival in Seattle. Prior to that, Prima Donna had combed most of the free world with their allies Green Day, supporting the mega-band in arenas on the European and Asian continents.

The band's friendship with Green Day began when Prima Donna frontman, singer/guitarist Kevin Preston, joined Green Day side-project Foxboro Hot Tubs for their live dates. Following Prima Donna's extensive touring with Green Day, GD offered up their own Jingletown Recorders in Oakland for Prima Donna to use, and enlisted their head engineer, Chris Dugan, to guide the journey. The end result is the 12-song, Dugan-produced Bless this Mess. Right from the opening Sociopath, (a backhanded look at the social media obsession), through the soul-infused Tryin', to the sleazy Crimson Lust, and the barroom sing-along Broken, this is an album that is determined to take you on a voyage. "We wanted to make an album that was hard to categorize," says PD drummer David, adding "we want people to get involved in it." "It should be like a roller coaster ride!" says the band's always exuberant bassist, Lights Out.

The previously mentioned single, Feral Children, was mixed by Grammy winner D. Sardy (Jet, Wolfmother, Slayer, Noel Gallagher, many more), and sonically calls to mind his most successful achievements. A swinging shuffle-beat, with lead guitar octave lines slithering over muted rhythms, sets up the anthemic chorus. "I wanted to write a song that could shake up a stadium full of rockers," laughs Kevin Preston, who penned the song. "I don't know exactly how it grew into such an obsessive monster, but I'm glad it did."

Feral Children had a previous life as a 45-rpm on the band's own Death Records label. Pressed up as a tour souvenir for the band's vinyl-obsessed fans, the original version was backed with a toughened-up rethink of the Blondie gem Rip Her to Shreds. Prior to that, Acetate issued the group's first full-length, the fan and critical favorite After Hours. In the time in-between the two LP/CD releases, the band logged over 250 shows, filmed a video for "I Don't What You to Love Me" from After Hours (the song was also the opening credit music for the Showtime Comedy special Vegas is My Oyster), and Little Steven proclaimed Prima's song Demoted as the #2 Coolest Song in the World 2010 on his Underground Garage syndicated radio show. "Little Steven and Sirius XM playing our stuff has brought the band to the attention of a thriving audience," notes saxman Minton. Prima Donna's track Puta, Te Amo was also voted Coolest Song in the World on February 26, 2012.

"If you see Prima Donna's live show, by the time it's over, I guarantee that you will walk out the door knowing that, by god, you've just seen a rock 'n' roll band. Odds are good that you'll also be humming a new favorite melody and grinning from ear to ear too, all while still digesting the rock 'n' roll spectacle you just experienced. And that, my friends, is always an exhilarating feeling".
-John Anderson, Twangville