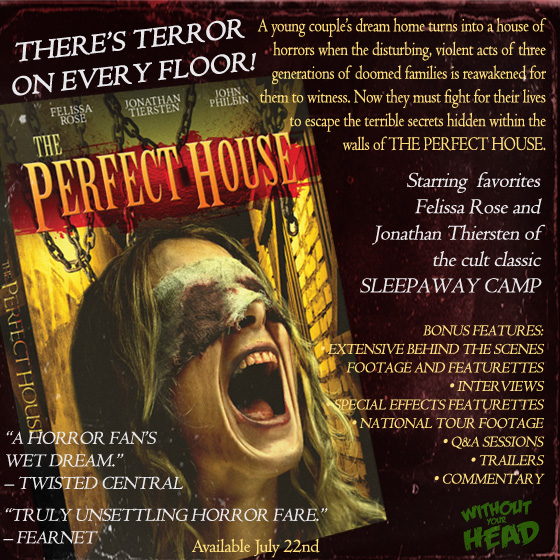 New York, NY -- Wild Eye Releasing has announced that The Perfect House, the anthology horror film from Kris Hulbert and Randy Kent, will make its long-awaited DVD release on July 22nd. Starring Sleepaway Camp's Felissa Rose and Jonathan Tiersten and Return of the Living Dead's John Philbin, The Perfect House will finally be available to own after a multi-city theatrical tour and screenings at film festivals and horror events across the country.

The film has been hailed as a "love letter to classic and modern horror" (Just Press Play) and having "enough gore for ten movies" (Crosstalk New York). The Perfect House won awards at several fests, including Best Visual Effects and Best Actor at the Underdog Festival and Best Feature at the Scarlet Waters Film Fest.

The Perfect House is an anthology inspired by the styles of three of the most famous time periods and sub genres of horror. Each vignette reveals a dark side to suburban anonymity through three different homeowners of the same house. A young couple are now looking to buy the house, but the violent acts of the previous doomed occupants are reawakened for them to experience. Now they must escape or become part of the legacy of pain that lives in the basement, and possesses anyone who stays too long.