Let’s get blazed! A24 partners with THE WORLD’S BEST EVER and BUDS & ROSES, a Los Angeles based medical-marijuana dispensary, to sell two brand new cannabis strains inspired by Kevin Smith’s TUSK!

A24 will release TUSK in theaters nationwide September 19, 2014.

“Kevin Smith’s “Tusk” is an utterly bizarre, weirdly compelling story of manimal love that stakes out its own brazen path somewhere between “The Fly” and “The Texas Chainsaw Massacre. Twenty years on from “Clerks” Smith has delivered a left-field surprise that ranks among his very best work.” Scott Foundas, Variety 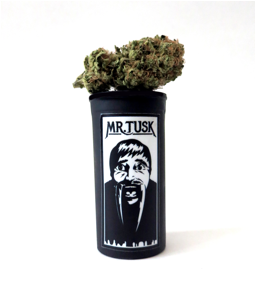 Buds & Roses will sell the two strains - “Mr. Tusk” and “White Walrus” - beginning today through September 26, 2014. For more information on the dispensary, check out their site here: www.budsandrosesla.com 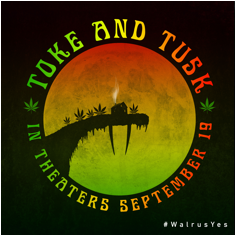 A chilling horror tale about the perils of storytelling, Tusk follows a brash American podcaster as he braves the Canadian wilds to interview an old man with an incredible past—only to discover the man’s dark secret involves a walrus.