Watching Movies - It Lives In The Attic

Review of "It Lives In The Attic" by The Headless Critic 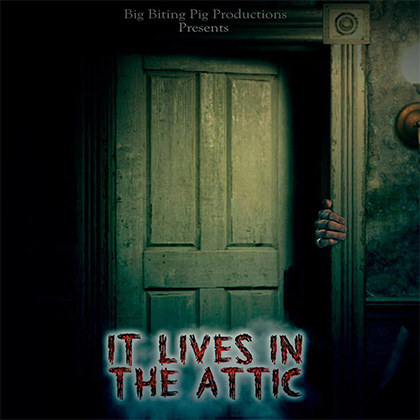 When the credits opened showing this movie is produced by 'Big Biting Pig Productions' you know it won't be an ordinary film. There are low budget movies then there's no budget movies. It Lives in the Attic is definitely the latter. Likened to a movie you'd find at a small town film festival, film school or even something your local town film geek might have made. There wasn't much in the way of Hollywood production.

A woven together tale of short stories taken from the connecting lives of a group of people. Much like the Tarantino classic Pulp Fiction, we start at the end and we end where we start. It Lives in the Attic has some good ideas in the story itself. Though the storyline is heavily flawed at times. The dissected way of telling it, was perhaps a bit beyond the filmmakers ability to pull off. At times it ran over itself. Though you could see where it was going early on. They also let you wonder off a bit in the middle of the movie leading to some confusion from lack of storytelling cohesiveness.

The one thing I appreciated most about the film was their use of actors who look real instead of using Hollywood beauties. A good actor regardless their looks would have been appreciated most of all. With no production value, cast talent and third rate shooting, the somewhat interesting script and realistic looking cast isn't enough for me to recommend this to anyone.