Review of "Peelers" by The Headless Critic 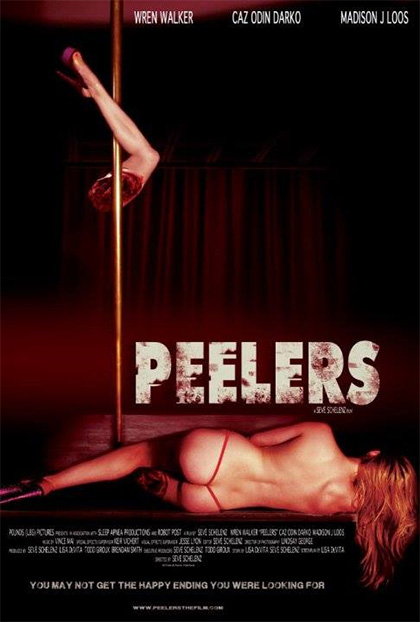 On the final night this strip club’s open, the owner gets the going away party of a lifetime. Infected patrons come in for more than naked women, nasty beer and bear meat which is served on the menu. These strip club goers have a taste for blood. Blue Jean (Wren Walker) must defend the bar she’s closing, her stripper employees and herself as all hell breaks loose on closing night.

Traditional low budget horror conditions of bad acting, corny dialogue and a weak premise are all met but nothing that horror fans wouldn’t expect. Where Peelers excels is that they don’t take themselves seriously, successfully mixing comedy and kills into over the top fun. My one complaint may surprise some. After a couple of hilarious stripper dance scenes, I was waiting to see what they did with the pregnant stripper. If I have any issue with this cheap thrill ride, it’s that I didn’t get to see the comedy, that scene could have provided. Opportunity was wasted and all for a Winnie the Pooh reference? Peelers could have also used a Tom Savini helping on practical effects but on a budget they limited CGI and kept it fun.

Besides bear, Peelers serves up a healthy mix of boobs, blood and hilarity. At first glance it seems like another cheap thrill, boob filled, horror film. It is, it also successfully pulls off comedy in between its many kills which is something most movies fail at doing. With a set-up similar to From Dusk Till Dawn once they get to the bar and an overall pace that’s closer to Feast, the comedy is crude and immature and won’t be for everyone. If you like John Gulager movies and you’re ready for some fun, Peelers packs a punch and a punchline.