Review of "Voodoo" by The Headless Critic 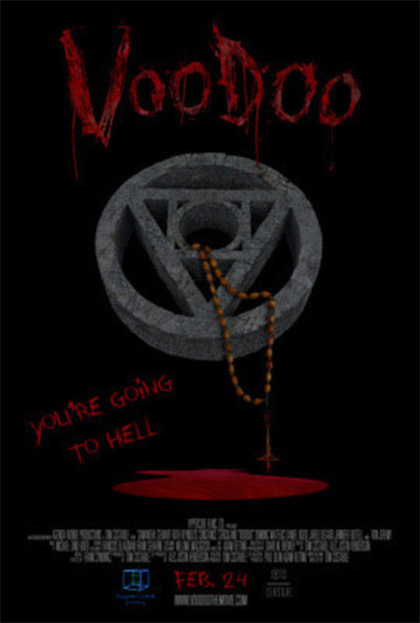 When a girl tries to escape her recent bad relationship by vacationing with a cousin in Los Angeles, she soon finds out that all problems can't be ran away from. This self-filmed, documentary style, found footage movie has some seriously creepy scenes in Voodoo. There's also some scenes so poorly executed they're laughable.

Voodoo starts with an intriguing first kill. It doesn't show a lot, successfully leaving the brutality to the viewer’s imagination. Poor acting, low quality fake blood and an extended scene ruin an otherwise excellent opening. From there we enter 30 minutes of basically watching home vacation videos. The dialogue is realistic and boring but with a purpose. I doubt much of it would actually be talked about while someone was filming. The delivery of the dialogue doesn’t help to quite capture that realism but I do enjoy the real southern accents. That part helps with the overall realism the documentary style film goes for.

After an intentional 30 minutes of nothing, Voodoo delivers a, 'what the hell was that' moment that I could have done without. No I'm not talking about the random appearance of Ron Jeremy. In fact I would've enjoyed a little more random Ron Jeremy in this film. It’s a prelude to what happens in the third act that I personally feel wasn’t needed and takes away from the shock factor to follow.

After another 15 minutes of home vacation footage, Voodoo succeeds with its real wow moment. Without giving too much away, all hell breaks loose. I loved the final turn the film takes. It makes the first 45 minutes, worth it. It also shows its budget with effects so poor it felt more like walking through a haunted house for Halloween than a movie production. I still enjoyed it. I'd be interested to see what writer and director Tom Costabile can do with a proper budget. Perhaps even in a remake.