Review of "Justice Served" by The Headless Critic 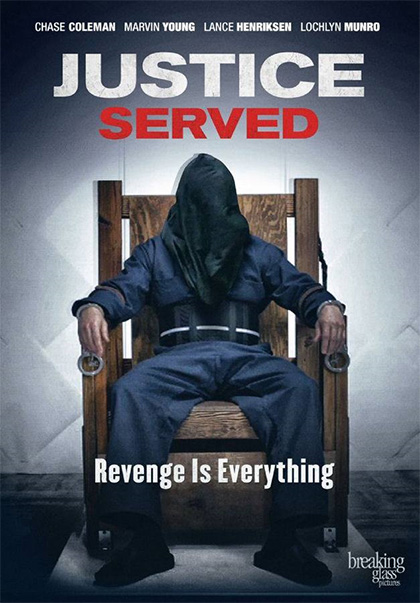 Early 90’s rapper Young MC (Marvin Young) attempts to Bust a Move as writer, director, actor and producer in his first film. The Brainstorm of his first effort is a bit far-fetched. The simplest explanation is, a set of accused men awake to find themselves tied up and on trial by their presumed victims’ families.

At first glance Justice Served appears it might be a Saw like torture film. Instead the film takes a different direction, veering away from being a spectacle and instead focusing on its characters. The concept of Justice Served is an intriguing one, though it’s done in an oxymoronic way. It’s overly complicated yet still simplistic. I agree that serious, low budget films should be character and story driven. When you do that, you need good acting with character development in an in-depth script.

Lance Henriksen is a stand out performance in a cast that was sometimes hard to watch. It’s never a good sign for your film when a single actor stands out so far above the rest of your cast unless there’s an Oscar nominated performance involved. Marvin Young himself may have been the next best performance. The female performances in particular are bad. I won’t strictly blame the cast. Young MC wasn't Stone Cold Rhymin' with his dialogue and perhaps didn’t know how to write for women.

The black masks used by the ‘guards’ seemed out of place. I know you’re on a budget but I still feel they could have come up with something better or even used nothing at all. The synthetic voice of “Justice” the mysterious Jigsaw like mastermind of this ordeal was another thing that didn’t set well with me. While the voice of Jigsaw from the SAW movies was creepy, Justice came off more as a kid playing with the sound of his own voice he’d recorded.

While I Come Off like I'm taking Marvin Young to the Principal's Office, Young MC Ain't Goin' Out Like That. He had some good ideas in his first effort. I say continue the character driven stories until you get a budget to maintain anything else. While the storytelling was a little confusing, the twist ending is enjoyable. The awkwardly lame death of a character who ends up with a gun through her chest dripping blood from the barrel is so bad I enjoyed it. Definitely get a better casting director in future. All of that said, if you’re thinking of checking this one out do it for Lance Henriksen’s performance.