Review of "The Devil's Candy" by The Headless Critic 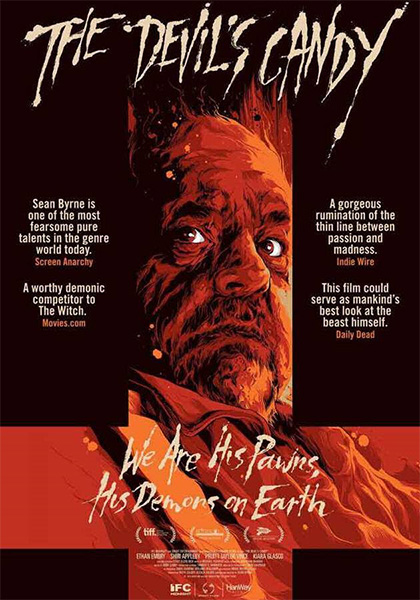 A struggling, rocking family gets a great deal on their new home because the previous tenants had died there. The ingredients for the Devil’s Candy is a little haunted tale, some demonic possession, a pinch of home invasion all stirred with a psychotic murderer. “For Whom the Bell Tolls” leads us into an intense thrill from the very beginning. Bands like Metallica and Slayer set to tone for what is the best metal driven horror film I’ve seen to date. The soundtrack is accompanied by an intense score that drives this film over the edge of insanity.

I can’t say enough about the performances in this movie. Ethan Embry is a far too often forgotten Hollywood gem. He takes the lead role as the father of the family who moved into the ill-fated house. Pruitt Taylor Vince, who always delivers no matter the role, executes his creepiest performance yet as our madman Ray. That’s saying a lot as he was wonderful when we got lost in his mind in 2003’s Identity. Young actress Kiara Glasco keeps up with her much more experienced peers with an equally impressive performance of the families teenage daughter Zooey. Should she choose to stay in the horror genre, we have another scream queen in the making.

I prefer to go into a movie fresh, with as little beforehand thoughts as possible. I’d had seen a trailer for the Devil’s Candy around Halloween 2016 and have highly anticipated seeing it since. 6 months was well worth the wait. I wasn’t surprised when looking it up after viewing, that it was made by the man who wrote and directed the 2010’s Australian import The Loved Ones. Sean Byrne has only directed two feature films. Both films are serious contenders for the best horror movie of their respective years. He followed up his very impressive The Loved Ones with a movie that was very different and possibly more impressive in the Devil’s Candy. Byrne has solidified himself as a filmmaker to watch.

The only bad thing I will say about the Devil’s Candy involves the ending. Without giving too many spoilers away, it’s an abrupt ending with a fire scene leading into it. While I understand it was metal fused ending they were trying for, poorly animated fire really takes you out of a movie. The abrupt ending right after is simultaneously fitting while also leaving you wanting.

The true travesty of the Devil’s Candy, is that it wasn’t given a wide release in theaters. If a distributer with a little backbone had gotten this film nationwide in the states, I feel word of mouth among the horror community and movie fans in general would have quickly turned this film into a long running box office draw. Every horror fan needs to get their hands on this one. If you haven’t watched the Loved Ones either, go out of your way to find it as well. This movie is equal to box office hits Get Out and Split, making 2017 a fantastic year for horror. Only a third of the way through the year and it’s not even Halloween yet.