Review of "31" by The Headless Critic 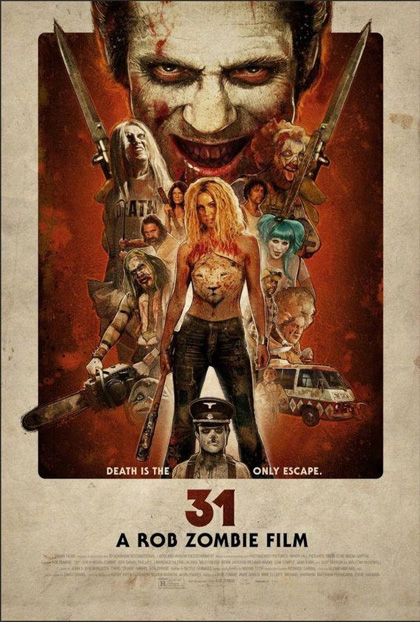 If the ‘Running Man’ was a horror film… A group of carnies are kidnapped and forced to participate in a violent game where they must survive twelve hours in a hell house being hunted by killer clowns. Carnies, clowns and killers, oh my. Killer clown after killer clown is sent to take out our group of less than heroic carnival workers. Each clown comes complete with their own personal spin. This annual 12 hour, Halloween event is put on by a group of rich eccentrics who entertain themselves betting on who’ll be Surviving the Game.

There’s not many people better at capturing dilapidated, horrifying and gruesome scenes than Rob Zombie. Sometimes he gets lost shooting scenes to be shocking or convey gruesome images leaving the flow of the story in the dark. His worst trait is writing Tarantino wannabe dialogue, which again gets lost in trying to be shocking but is void of all reality. His writing and shooting style has simultaneously provided the best scenes he’s directed as well as made some of his films hard to watch. Zombie is one of the best at gritty filmmaking and no one does crazy better. Unfortunately not all characters can be crazy.

31 is no different in his filmmaking style. The films protagonists are a group of carnies that aren’t exactly heroes. The films villains aren’t much different than it’s heroes, only one group is on the attack while the other is playing defense. The highlight of the film is the enigma of the Spanish speaking, Nazi dwarf, clown Sick-Head played by Pancho Moler. You couldn’t write a more interesting character for an over the top movie. The main killer clown in the movie is the Joker. How do I know it’s the Joker? The film’s opening scene is the Joker, known in this film as Doom-Head, telling you that he’s not the Joker. You wouldn’t need to write than scene and open your movie with it, if it weren’t true. That being said, Richard Brake made an excellent, crazy, killing Joker character. He was completely, unrealistically over the top but so are most of Zombie’s characters.

Outside of the Devil’s Rejects which was one of the best horror movies of 2005, I’m not otherwise a fan of Rob Zombie movies. For me 31 is his second best film to date. Though we’ve seen this Battle Royale before, this is Zombie’s gritty take on it. While I have no doubt Heath Ledger inspired a character in the film, it was still a good performance. Some things remain unexplained to the viewer and the ending was abrupt and weak. For someone who generally has a disdain for Zombie films (don’t get me started on Halloween) this is no Devil’s Rejects by any means. This is however the only other film of his I’ve found enjoyable.


WYH Presents: Q&A Panel with the cast of 31


WYH Interview with Malcolm McDowell of 31