Review of "B&B" by The Headless Critic 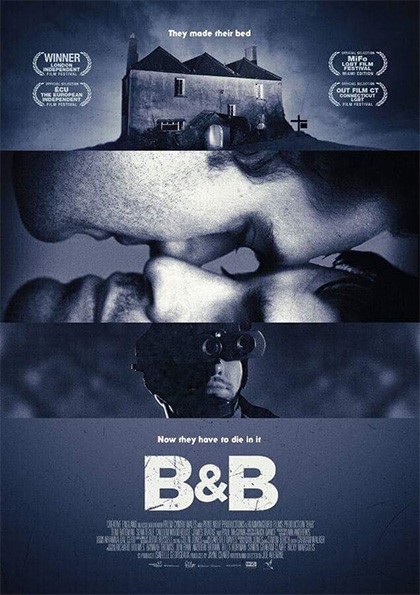 A year ago, Marc and Fred (Tom Bateman and Sean Teale) were refused a bed to sleep both of them by Christian bed and breakfast owner Josh (Paul McGann). After winning a court case against the B&B, the couple return the following year to force the issue again. A fight for conjugal rights against religious beliefs turns into a fight for their lives as the couple unravel the mystery of another B&B patron while dealing with the Christian inn owner and his believed to be gay son.

In a progressive Hollywood world of ever growing all female leads, director Joe Ahearne takes the U.K. a different way in his all male cast of mostly homosexual characters. It's a breath of fresh air from forced spins on movies, instead letting the film be what the story makes it.

A slow paced detective novel of a movie. B&B has a throwback feel to the nearly lost storyline with the creepy neighbor moving next door to the teenage youth who's job it is to prove their new neighbor is evil. All done in an adult way with many undertones of topical societal issues.

If horror movies had their own Oscars, I feel like B&B would be a contender for best picture and possibly best performance for their topical, multi-layered story. Not your typical popcorn eating scare, B&B is a good suspense thriller that's very slow paced but with a good final act. Oscar nominated films are rarely on the top of my list, but B&B is an enjoyable film. If you prefer well written, suspense thrillers to typical horror scares, this B&B may be where you need to rest your head.