Review of "Pitchfork" by The Headless Critic 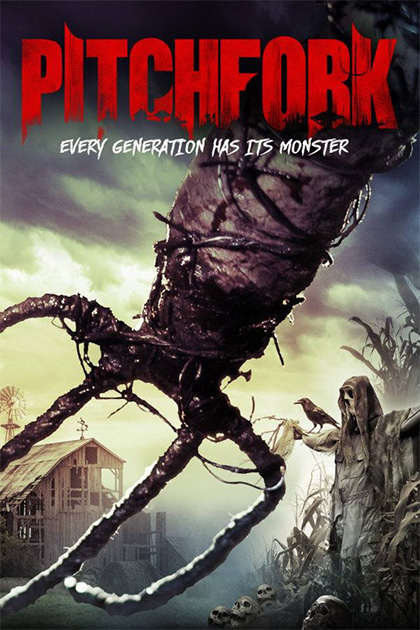 College student Hunter (Brian Raetz) brings a group of New York City classmates home to his Michigan farm for moral support as he comes out to his rural, small town family. Coming out of the closet turns into hiding in the closet as the group is pursued by a killer with a barbwire wrapped pitchfork as a hand.

Every generation has it’s monster, I’m not sure Pitchfork is it for millennials. Pitchfork seems set to create the next great slasher series from the beginning. When the greatest iconic killers of horror were created, they didn’t come to the box office with intentions of being a series. Wes Craven created A Nightmare on Elm Street because of a dream he had. John Carpenter wanted a series but didn’t intend to have Michael Myers return for the sequels. Friday the 13th decapitated it’s killer, never to return again. Each of those films focused on a well written story and originality in it’s slasher. Pitchfork seems to follow suite instead of setting their own pace.

Still a great first effort from writer/director Glenn Douglas Packard. Pitchfork provides some intense kills and intimate torture. In particular, an extended scene of our villain trying to get one of his female victims to suck his gore covered pitchfork is disturbing. The end of the film is a little off-putting. Without giving the film away it seems to turn from the original Texas Chainsaw Massacre to the Texas Chainsaw Massacre 2 all in one film. I still enjoyed the double blades to the head. Watch the movie and you’ll understand. For slasher fans who are left wanting by this forgotten by Hollywood genre, Pitchfork may provide some needed relief.

WYH Interview with Glenn Packard the director of Pitchfork