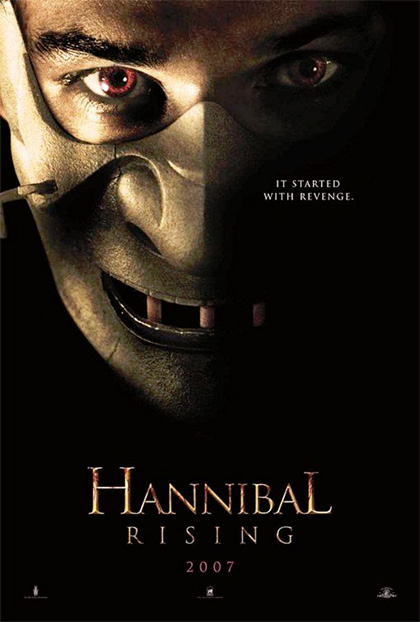 A prequel to the Hannibal Lecter trilogy, Hannibal Rising covers the life of Hannibal Lecter as a child to adulthood. Like the previous three films, Hannibal Rising is based on the Thomas Harris book of the same name. From childhood, we follow the key points of the life of the man who would grow up to be the world’s most famous fictitious cannibal.
Coming into this film, my largest concern was the casting of a young Hannibal Lecter. A tough role to follow after three wonderful performances of a character played so perfectly by Anthony Hopkins. Little did I know this would be the least of my worries as both Gaspard Ulliel and Aaran Thomas as young Hannibal do excellent jobs filling his pre-cannibalistic shoes.

The beginning of the movie shows the life changing moment of the child Lecter. While predictable, it's also absolutely riveting. It has an edge of your seat intensity, luring viewers into every aspect of the film. If only the story had stopped there, or simply not been about Hannibal Lecter.

We continue though, following Hannibal Lecter as he grows up, becomes a samurai, a doctor and a Nazi slaying superhero. Okay, that’s a bit of a simplistic overstatement. For fans of Lecter, this movie and the book both turn him into a likable character. The greatest thing about the Lecter's character is he’s absolutely horrible yet you can’t help but to like him. There was never a need to try and make viewers/readers like Hannibal. To sink so low as to have Nazi’s be his enemy because there’s nothing else worse than a cannibal, is a bit of a joke. To have a character that the world’s followed for decades in both film and in writing, turn into a heroic sword wielding Nazi slayer, is a flat out insult.

I once read that after Silence of the Lambs and Red Dragon, Hollywood wanted Thomas Harris to write another book they could turn into a movie about Hannibal Lecter. When Harris refused to force his creativity, whomever owned the theatrical rights to Lecter threatened to continue on with another Hannibal movie not written by Harris. So Thomas Harris agreed to write another book which ended up being called Hannibal. To get back at Hollywood forcing his creative hand, Harris wrote an ending he thought would piss them off. ***Book Spoiler*** Harris wrote the much younger character of Clarice Starling getting brainwashed by the older Lecter into becoming his girlfriend. In the book she runs off with Lecter, away from the FBI, friends, family and even country. Of course the Hollywood big wigs simply rewrote that part of the book to fit what they wanted of their movie. I lost some respect for Harris as a writer. Not only did he compromise his creativity for Hollywood but he also didn’t stay true to his characters. After that it was no surprise to me that Hannibal Rising takes the heroic turn that it does.

Hannibal Rising as a standalone movie is above average. The beginning of the film is marvelous. The portrayal of Lecter by Ulliel keeps you intrigued. The film and it’s performances are grandiose. It sets a nice believable, Nazi era wartime and post war setting. It goes a little over the top by the middle and end, with an unrealistic superhero without superpowers character. Hannibal Rising is not a standalone film though. It's the final (up to this point) of a quadrilogy. Hannibal Lecter is not a superhero. This is a big screen, big budget, Hollywood version of a character we already know. To make things worse, it’s written by the original creator himself. I won’t say Hannibal Rising is a bad film. I will say it’s a ridiculous prequel. I rarely say this but I think the series and character would have been better off stopping at the first two stories, Red Dragon and Silence of the Lambs.