Review of "Besetment" by The Headless Critic 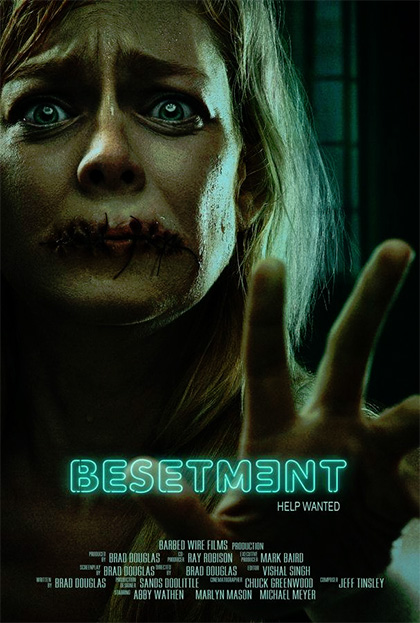 Amanda (Abby Wathen) lives at home in a trailer park with her drunken, overbearing mother. An opportunity comes her way, offering her a room to stay, a job that pays, in a small town many miles away. Free from the family she wants to distance herself from, Amanda capitalizes on the opportunity taking the job at the Oregon Hotel. There she goes to work for an elderly owner, Milly Covin (Marlyn Mason) who owns, operates and lives in the hotel with her adult son Billy (Michael Meyer) who isn’t quite right mentally. All isn’t as it seems and Amanda is stranded far from home and everyone she knows.

Not a technically sound film in many ways, there’s a familiarity in it that keeps the viewer intrigued. While there may not be traditionally good performances, the most intriguing part of the film is it’s cast and characters. Led by veteran actress Maryln Mason playing the Inn keeper Mildred in an appropriately over the top, creepy performance. Michael Meyer plays her son Billy. Meyer looks the part of a perverted villain, plays a slow person well and has innocent childlike eyes that are so perfect for the character they can’t be scripted. Director Brad Douglas successfully makes realistic characters in a girl from a trailer park and a boy who’s a fry cook at a local diner. Even the brief performance of the plunger handyman, Pastor Ben Hastings (Douglas Rowe) is a familiar role and one of the most enjoyable in the film.

The film is far from perfect. It’s shot like a made for tv movie. Many of the powerful horror scenes fall a little flat. There is an extended incestuous scene that seems long and unnecessary and also makes you feel dirty for watching it. That's an accomplishment most films can’t achieve. A low budget film, the lighting, sound and cinematography are sometimes a bit off. It has a score set somewhere between Knight Rider and Halloween. The opening sequence was more like that of a television series than a movie. It looks like American Horror Story and Dexter’s intro’s threw up into this mix of the two. If you give up on this one without giving it a chance you will miss out on some good things. I can’t say this is a great film but there is some great stuff in it and I enjoyed it far more than the quality of the low budget film making. Which is a great compliment.