Watching Movies - We Are The Flesh 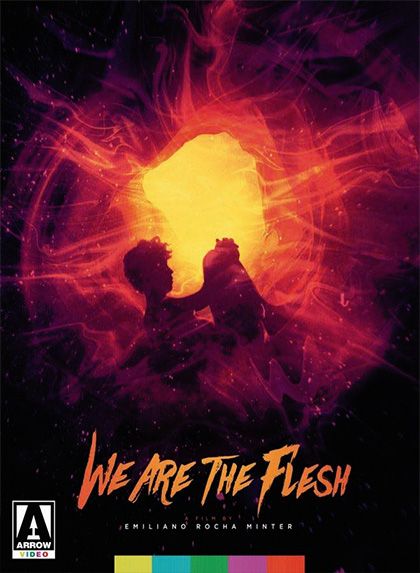 We Are the Flesh is an unsettling experience. It makes you uncomfortable while keeping you guessing. The films opening is inthralling, as you try to figure what is going on. When the couple roam onto screen, the movie gives into carnal desires turning from a nearly silent film into a sex fueled nightmare.

This Mexico, arthouse, import isn't shy on nudity. It's a teenagers sex driven vision of a shocking movie where close up shots of genitals is a common thing. I never knew a scrotum moves as much as it does until I watched a thirty second close-up of a hairy one. Rape, incest and one man flipping another's penis up and down in his hand are just a few things to expect going in. Death by ejaculation onto siblings having sex? This psychotic trip of explicit imagery has that too. If this were rated in the states it would easily earn an NC-17 label.

The craziness doesn't stop until the credits roll. We Are the Flesh does something few films can. It makes you cringe, grosses you out and makes you feel uncomfortable. It's also intense, beautifully shot and has an excellent score. You keep thinking the story is going to pull itself together. It never does but it becomes fitting as the film descends into madness.

It's difficult to critique a good performance in a foreign language film because you have one less criteria to judge from. Nevertheless Noé Hernández delivers an obvious tremendous performance as Mariano, our initial madman.

Special Features:
Usually in foreign films special features are lacking. We Are The Flesh's features certainly are not. While there's no commentary track there are a few in depth interviews about the film. What puts this Blu-ray over the top is they added short films in its features. There's so many short films out there that go unseen by most or dwindle away lost on the internet. It's nice to find them in the special features when you buy a Blu-ray or DVD. An added bonus to buy this feature.