Review of "American Mummy" by The Headless Critic 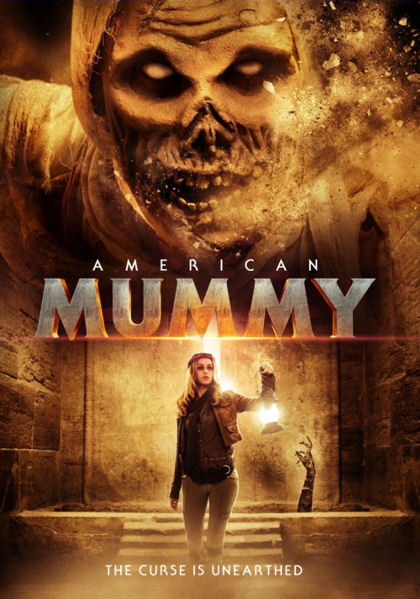 College students on an archaeological dig in the New Mexico desert, unearth more than ancient artifacts when one student performs a blood ritual on an unearthed mummy, leading to a fight for survival. This feature with a budget higher than you’d expect takes the Jason Goes to Hell route, making their mummy possess the bodies of our ill-fated class. Our American Mummy turns into American Zombie as the cursed classmates attack each other fulfilling the blood thirsty Mummy’s unquenchable dryness.

This Mummy monster movie starts off feeling like a throwback 80’s teen, horror, skin flick. I believe in the first twenty minutes of the film there isn’t an actress left that hasn’t bared her bosom. The breasts are plentiful but as the movie progresses the gore came out. American Mummy goes from a campy 80’s teen flick to a no budget 80’s horror, where the special effects were made up as needed and on the spot. The film tries to teeter between horror and comedy similar to the Evil Dead. With practical effects this bad, in a modern age, I have no doubt they were trying to duplicate a movie they grew up loving. 1981’s The Evil Dead would have never worked without the brilliance of Bruce Campbell. There is no Bruce Campbell in this film.

Also known as Aztec Blood, this movie no doubt did it’s rounds on the film festival circuit and has dwindled in limbo since 2014. With the upcoming release of the big budget Universal movie The Mummy, a distribution company made a filmmaker happy picking up their movie. You won’t find Tom Cruise in this film any more than you will Bruce Campbell. It does have a few laughs, practical effects which are greatly appreciated and plenty of nude women to be killed off in gory ways.