Watching Movies – Night of the Comet 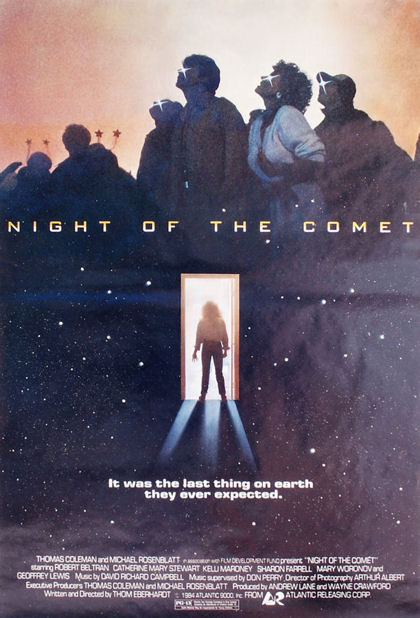 “It was the last thing on earth they ever expected.” Everyone seems to be celebrating as a comet hurdles towards earth. “The last time it came, the dinosaurs disappeared.” Two valley girls Regina Belmont (Catherine Mary Stewart) and her little sister Samantha (Kelli Maroney) are too caught up in fashion trends and their own lives to worry about tomorrow. When tomorrow comes, they realize they’re the only people left alive who aren’t zombies. Sounds like a good time to go shopping. “They came. They shopped. They saved the world!”

A fun filled, extremely 80’s film which makes it even more enjoyable to watch. It’s a throwback to post-apocalyptic classics in a modern (for the time) way. Valley girls vs Zombies contains all the sex driven, zombie bitten, dark yet funny storytelling you could want from this slice of 80’s Americana on overdrive. Night of the Comet doesn’t get caught up with intentional laughs, playing the straight horror film role well.

It’s a well made, darkly lit with appropriately over the top performances. Night of the Comet has a good sized cult following. If it’s an 80’s horror movie you missed, definitely find a copy and see if you want to join the cult. If you’ve already seen it, you should get an enjoyable, reminiscent watch like me. Younger readers will get a true taste of 1980's film. Dawn of the Dead may have initiated the zombie mall movie but Night of the Comet had fun shopping.

WYH Interview with Kelli Maroney of Night of the Comet