Review of "Chopping Mall" by The Headless Critic 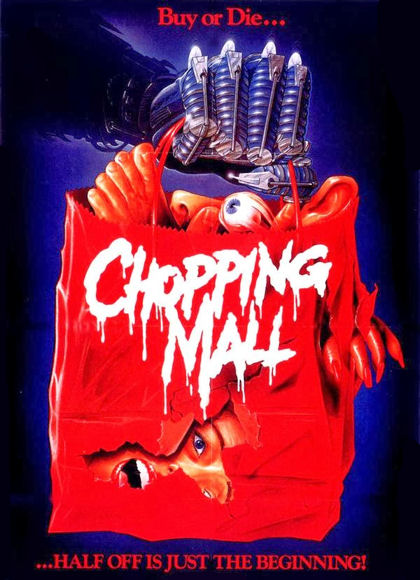 The future in mall security is here. “Tonight Park Plaza Mall switches on the world’s toughest security force. Absolutely nothing can go wrong.” That is, until a group of teenagers hide out overnight in the mall and our robot security malfunctions thinking shopping spree, means killing spree. “At Park Plaza Mall the security force isn’t just tight, it’s terrifying.” “Shopping will never be the same!”

Chopping Mall is 80’s horror in it’s stride. Directed by the B-movie master Jim Wynorski, it’s an A-list movie all the way. It successfully plays on the fears found by a 1980’s audience of a robot controlled future. Terminator meets Dawn of the Dead in this Robocop gone wrong trip to the mall, “Where shopping can cost you an arm and a leg.”

This “Buy of Die” film casts a wonderful group of “teenagers” including actress Kelli Maroney from Fast Times at Ridgemont High and Night of the Comet, in her lead role. The supporting cast pulls Russell Todd fresh of Friday the 13th part 2, Tony O’Dell from Karate Kid, Barbara Crampton of Re-Animator, Nick Segal of the appropriately titled Breakin’ 2: Electric Boogaloo and future Deathstalker himself John Terlesky. If you must “Shop til you drop, dead” trapped in a mall with three killer robots, you might as well have a Deathstalker on your side.

If anyone hasn’t been to Chopping Mall, “they slash their prices and their customers”, while providing a few laughs but staying a horror movie. This is something that seems like it'd be easy to do but is all too often lost on filmmakers today. Chopping Mall is ingrained into horror culture as an 80’s classic that should be on every horror fans shelf or playlist. Killer robots in a mall that shoot fantastic 80’s lasers. What more could you ask for?