Review of "Karate Kill" by The Headless Critic 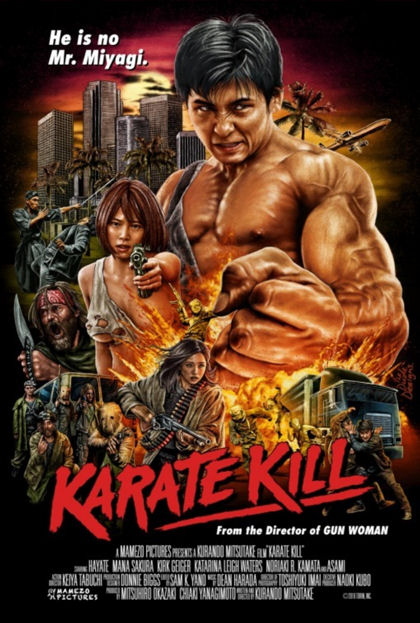 “He is no Mr. Miyagi” and when Karate master Kenji’s (Hayate) sister Mayumi is kidnapped in Los Angeles by a criminal cult called, Capital Messiah that’s lead by Vendenski (Kirk Geiger), he’ll stop at nothing to get her back. This Karate master will “Karate Kill” whoever stands in his way of finding Mayumi (Mana Sakura).

I can’t say enough about this throwback, martial arts film. Where modern martial arts movies are getting supernatural in their abilities, Karate Kill stays over the top but grounded in a simple revenge epic and mano-a-mano fights. Everyone in the movie played their part well. Hayate’s performance does martial art movie masters like Jackie Chan, Bruce Lee and all those “Kung Fu” movies of the 70’s and 80’s proud. He barely speaks a word and kicks plenty of ass. Kirk Geiger was an excellent cult leading madman. A cameo by Akihiro Kitamura referencing his Human Centipede role was hilarious. I also don't know that I enjoyed seeing someone repeatedly beaten down more.

This is definitely a genre piece for a niche audience. For grindhouse or old school Kung Fu movie fans, this is the film you’ve been waiting for. Karate Kill does for Kung Fu movies what Quentin Tarantino did for 1970’s grindhouse filmmaking. I’ll even say it, for me Karate Kill is a far more enjoyable martial arts movie homage than Tarantino’s samurai tribute series. Karate Kill Bill.

Tarantino may have brought the genre back but Karate Kill stands on it’s one with movies like Hobo with a Shotgun, Death Proof and Planet Terror. It’s possibly the best one of all. While over the top at times, Karate Kill doesn’t go so far to be purely comical like Machete and Black Dynamite and is a far better movie for it.

This is Japanese director Kurando Mitsutake’s fourth feature. There aren’t many directors I follow so I mean this as a great compliment, I will look for his previous films and keep an eye out on what he does next.