Review of "Army of Frankensteins" by The Headless Critic 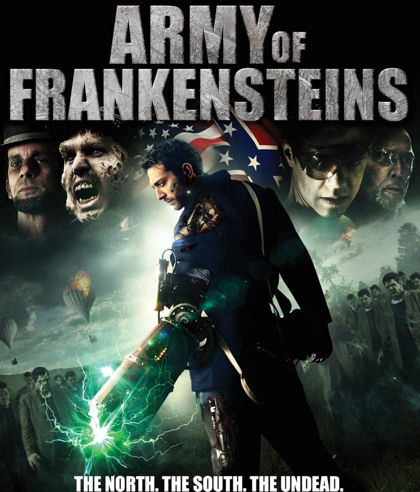 From the title, till the credits roll their’s little that’s accurate about Army of Frankensteins. The title alone should be Army of Frankenstein’s Monster to be accurate. Or for this movies sake, Finski’s monsters. I guess that title just doesn’t have the same appeal. This movie has everything, and I do mean everything. Frankenstein’s Monster, catman monster, civil war soldier monster, time travel, the Civil War, futuristic weapons and teenage angst. Imagine Abraham Lincoln Vampire Hunters with time travel and no budget.

Army of Frankensteins commits every sin of low budget filmmaking. They do CGI, in a period piece film with child actors and an overly complicated story. Computer animated special effects with no budget never turns out well. Though details weren’t strictly followed, it was a somewhat period piece film. First time writer/director Ryan Bellgardt may not have known what he was getting himself into with this script or perhaps he loves figuring out how to make things work within confinement in what he did within this film. Then again, maybe he just enjoys giving himself a headache. It was a lot to tackle for any movie, especially on a budget and even more so in your first venture in the director’s chair.

Unlike Bellgardt’s second feature “Gremlin”, which is far more serious, Army of Frankensteins is over the top, lighthearted fun. With a title like that, how could you not be? I really enjoyed the first third of the film. It was so over-the-top, it was enjoyable. It provided several laughs and was beginning to remind me of movies like Monster Squad from my youth. Army of Frankensteins brings a whole new meaning to Monster Vision with their hazy green Frankenstein vision. The time travel was a bit too much for me but I went with it and was enjoying myself. I absolutely love the enormous amount of horribly bad, fake facial hair in this film. It’s the kind of things you add into a low budget movie because someone on the crew knows a girl who works at the fake moustachery.

Ultimately the hilarity doesn’t last for a full feature. The novelty of an army of Frankenstein monsters time travelling to the Civil War era slips into absurdity and begins to feel more like a children’s film. Frankenstein in a mechanical neckbrace takes the route of Charlie and the Chocolate Factory’s Oompa Loompa’s in their duplication of one actor as their army. Other than one head smashing scene that I quite enjoyed, the computer effects of the movie are a Syfy channel level of bad. I’ve honestly seen better green screen done online for free that looked better than the big battle scene of this film.

Syfy channel style movies are not my genre. For those of you who like these films and I know there's an audience who does, Army of Frankensteins provides some laughs and is completely ridiculous. It definitely lives up to it’s title.

WYH Interview with Ryan Bellgardt director of Army of Frankensteins