Watching Movies - Property is No Longer A Theft 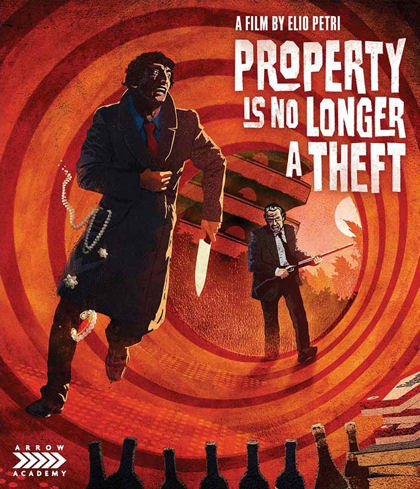 A bank clerk named Total (Flavio Bucci), who’s literally allergic to money, decides to start a new life for himself after witnessing a robbery. One of the thieves is caught and beaten by the banks top customer, a wealthy Butcher (Ugo Tognazzi). Fed up with seeing clients like the greedy Butcher get wealthy while he’s denied a loan from his own bank, Total begins stealing small items from the beat down Butcher. The Butcher in turn files fraudulent insurance claims for his missing items that don’t have the value he’s making claims against. Total quits his job to devote his time to tormenting the Butcher. Total’s thefts progress from insignificant, to petty, to small robberies then more substantial fraud. He even steals the Butcher’s woman.

The third and final film of director Elio Petri’s Trilogy of Neurosis. A trilogy of individual films connected by their exploration of the human condition. Property is No Longer a Theft is filmed a little different than most movies of the era. A bit confusing at first, it may have just gotten a little lost in translation. As the film progresses it reveals itself as a comical satire almost venturing into slapstick at times. It’s still a nice story of cross-purposes, waiting like a western to see who draws first. That situational comedy would make an excellent play but is a little longwinded in a two hour Italian comedy. Acting from this time is almost always unrealistic, shining through even in a language barrier. I did enjoy Flavio Bucci of Susperia fame, in this performance as Total. The score excellent 70’s sounds done in a style found in many films of the era.

Special Features:
The Blu-ray 4k restoration by Arrow Films is very impressive, restoring a 45 year old film to life. English subtitles have been updated for this release. This two disc feature, features extended interviews including one with famed Italian actor Flavio Bucci of Susperia fame. This commentary alone is reason enough for fans of Property is No Longer A Theft or Susperia fan to purchase the Blu-ray edition. The Blu-ray also features interviews with film producer Claudio Mancini and an interesting interview with make-up artist Pierantonio Mecacci.

2 out of 5 Horror Filled Features