Review of "Spidarlings" by The Headless Critic 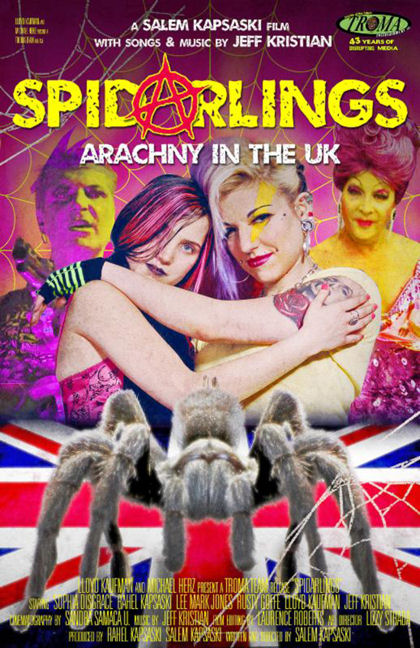 The opening is 90’s Tank Girl style animation, mixed with 70’s psychedelic in a modern way. The animation is accompanied by a perfect musical intro of “Spider in Love” by Two Russian Cowboys and Cleopatra Di Aragon. A really excellent opening that will get viewers excited for a B-Horror comedy with a title like Spidarlings. The animation continues at various times throughout the low budget film to simulate a spider-rape dream sequence and for exterior shots of the frequented club ‘Juicy Girls’. Pure scenes of cartoon animation works far better than poorly animated mixes of CG into low budget films. Maybe more movies should take note.

Struggling young couple Eden (Sophia Disgrace) and Matilda (Rachel Kapsaski) are two years behind on their rent and about to be faced with living on the streets. As there friend tells them, “I heard the other day that in Thailand; if you are homeless you can just live by the beach. I thought that was so you.” The lack of funds doesn’t stop the girls from purchasing a pet spider and giving birth to ‘Arachny on the U.K.’, breaking into several musical scores along the way. All scores except the opening are written by actor, writer, musical artist and drag queen extraordinaire Jeff Kristian. My personal favorite is the girls singing about the items they could buy while on a shopping spree, excellent stuff.

I enjoyed a lot of aspects of Spidarlings. Beyond the animation and musical score, it was nice to hear unrefined British accents and the German-British accent of director Salem Kapsaski's sister who plays Matilda. At the beginning of the movie Matilda can’t convince her girlfriend Eden to take her to the beach. Eden later walks in on Matilda “sunbathing” in the oven with a homemade aluminum foil reflector. No details on if the oven was gas, but with these girls it wouldn’t be surprising. There’s a nod to Japanese animation and their love of tentacle rape but it was the penis drill that was the ultimate for me. Practical effects done well on a budget.

I’m sure the filmmakers would prefer I only mention the positives of the film but “Bad boys don’t get any wishes, so fuck you!” It’s my review and I’ll die if I want to. The camera quality looks like it was filmed in the 1990’s. The cinematography is often times misplaced. While I enjoyed the movies score, the generally sound quality of non-musical numbers isn’t always good. Random shots of nothing, extended scenes of playing dress-up and unnecessary scenes that aren’t particularly entertaining make a movie that should be about an hour and a twenty minutes into an over two hour production. The editing could definitely have been better with at least half an hour of the film on a director’s cut only or stuck in Blu-ray special features. I enjoyed the musical numbers but they are a bit excessive which also adds to the runtime. By the end when we get to the leather strapped rockers excessive butt crack showing during an entire musical number, I’m tapped out on the movies music.

Spidarlings is such a low budget production, watching it is “going to be like getting fucked by an eraserhead.” But “Don’t frown eraserhead”, Spidarlings is a perfect Troma film. Memorable lines in shockingly random scenes and a grittily filmed movie, that’s anything but cookie cutter Hollywood. It held my attention because it’s so different than the studio norm. Which is a compliment. The direction the movie goes and how it gets there is anything but conventional. There’s lots of laughs and some B-Horror greatness, if you can make it past the lack of production values. Troma fans will not be disappointed