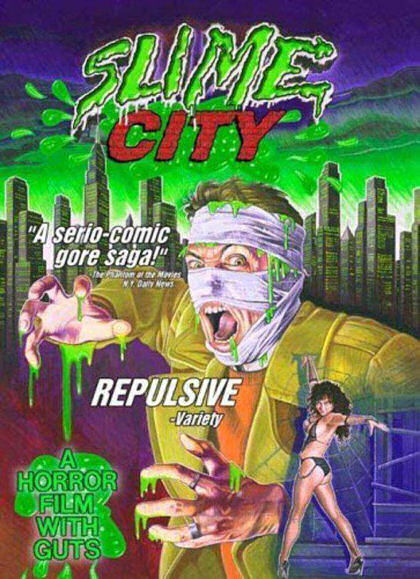 An art student by day, a murdering slime monster by night. Alex (Robert Craig Sabin) is living the city life. He rented a new apartment from a nice old lady Lizzie (Jane Doniger Reibel). He has a sweet, virginal, girlfriend Lori (Mary Huner). If he’s lucky enough, he’ll be able to combine those two into a passionate night together. Alex tries to acclimate to his new apartment building, getting to know his new neighbors. As your mother always said, you shouldn’t talk to strangers. Alex doesn’t heed that advice and begins mixing with the odd tenants around him. If Slime City teaches us anything, it’s never have dinner with a vegetarian. After eating the vegetarian's “yogurt”, Alex turns into a murdering Slime City monster by night.

Slime City is “A Horror Film with Guts!” and when those guts are spilled to the floor, this horror comedy just put them back in. This is not a low budget movie, it’s a no budget movie. It shows from the poor film quality, low grade sound and some heavily mixed performances. Slime City knows it’s no budget film role well and rolls with the punches. What it lacks in production values, it makes up for by going a step beyond the others. It starts by taking slime which is at an all time popularity high thanks to kids shows like Nickelodeon, Teenage Mutant Ninja Turtles and Ghost Busters and turning it into a grotesque monster movie, not meant for kids. Add in some dripping penises and you have yourself a film as gritty as the streets of New York’s Slime City.

Slime City certainly brings the gore. It may be because it’s 30 years later or perhaps because of the low budget but the gore is enjoyable on both a comical level as well as not believing they actually went there. Gregory Lamberson Author & Filmmaker created an excellent 80's B-Horror comedy in his first feature film. There’s lots of great B-effects that will please any practical effect fan. Slime City fits right in with the early TROMA films, B-Horror greats of the 80's and any fan of that genre of movie.