Review of "Killer Rack" by The Headless Critic 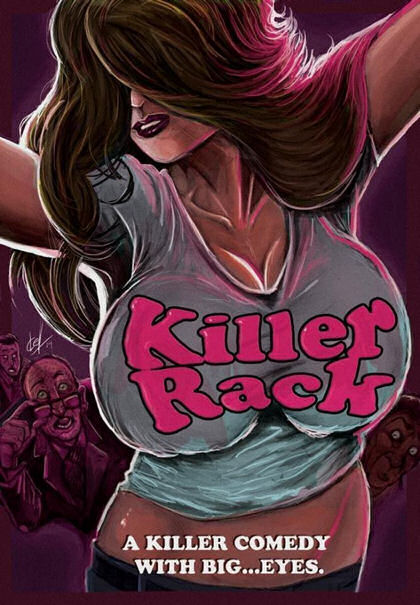 “So I’m writing my review right now…” “Betty Downer (Jessica Zwolak) has a problem, make that two.“ Betty is gifted with the figure of a 10 year old boy. In a male ruled society, Betty is overlooked at her job, unappreciated by her boyfriend and even made fun of by the real girls. “They’re flappy and slappy, they make me very happy. They make me want to bust out into song.” Which is what Killer Rack does in their brief musical breakout with the eloquently titled, “All You Needs a Pair of Fun Bags”. Exactly what Betty goes looking for, turning to psychiatrist Dr. Foin, played by Lloyd Kaufman in a hilarious cameo. Betty doesn’t listen to the B-movie legend and follows a late night infomercial to Dr. Thulu for surgical improvements to help her reach her peaks. Betty gets more than she ask for after getting comically enhanced she, “has a set of fun bags with a hunger for human flesh.”

Hang onto your bra’s we’re about to expand. Killer rack is a micro-budget film but Gregory Lamberson Author & Filmmaker has learned well to work within such budgetary confines. Production values are as small as Betty’s inverted breasts but don’t let that confine you from viewing like a bra. What the movie lacks in filmmaking basics, it makes up for in crude humor. The stereotypical storyline does grow a little tired in it’s receptiveness but with a title like Killer Rack, this should be expected. The first two thirds of the movie relies on such humor. Killer Rack slapstick, spoof comedy. Films like Naked Gun or Airplane aren’t my genre of choice but this big boobie movie does have some laughs. It wasn’t until the third half, when the monster rack is released than this Killer Rack reaches it’s peak. You can expect extreme stereotypes, lots of breast and dumb male jokes with an excellent B-Horror finish with mostly practical effects and one killer rack.

It’s “Not just any bra, it’s underwire bitch!” and the takedown of twin peaks commences. Teri Hatcher may have coined the phrase “They’re real and they’re spectacular” on the sitcom Seinfeld but Killer Rack borrows it and makes it their own. So lay your head down between two dirty pillows and enjoy the motorboat ride from Breastless Wonderland to the Mountain of Mount Killermanjuggo. “Got milk?” Betty does, and she’ll share when you watch Killer Rack.