Review of "47 Meters Down" by The Headless Critic 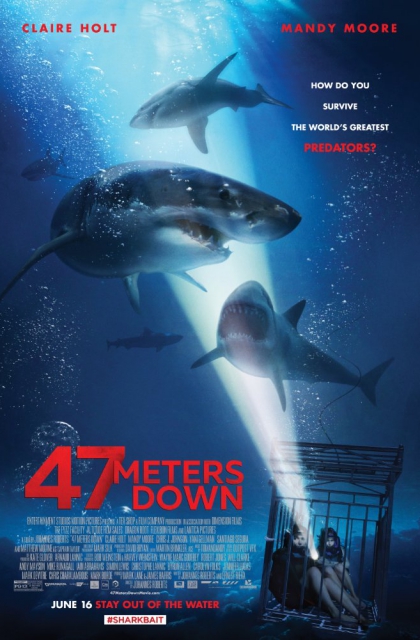 “Too boring” to keep a boyfriend, Lisa (Mandy Moore) takes on an adventure, vacationing in Mexico with her little sister Kate (Claire Holt). While partying Lisa’s heartbreak away, the sisters take up with a couple of local guys who convince them to go with them on a shark dive. The girls should “Stay out of the water” because in horror films, listening to the locals never ends well. Trapped 47 Meters Down with “No help above, no help below” the sisters have less than an hour to find their way to the surface while sharks circle them. “How do you survive the world’s greatest predators” when there’s “No way out, no way up, no chance in hell”?

I’m always supportive of smaller films getting a shot at a nationwide release. 47 Meters Down is a straight to video title that was no doubt picked up by a studio in hopes of duplicating the surprise success of last years The Shallows. Directed by Johannes Roberts who has several films under his belt at this point. His only national U.S. release to date, came last year with The Other Side of the Door.

Like most shark movies, while trying to duplicate the success of Jaws it misses what made Jaws a classic. It isn’t about the shark, it’s all about the realistic family. Not gorgeous women in a cage. This isn’t an instance of Hollywood whitewashing but an even more common offense of Hollywood beautifying. The movie doesn’t invest much time in a story before it throws the two sisters into the water. Most men’s 1990’s crush that still hasn’t gone away Mandy Moore, plays a thirty year old, partying like a teenager in an extremely stereotypical good girl to the point of annoyance character. Her character isn’t the only stereotypical thing about the movie, as most of the scares are to. It’s a very predictable film, that’s flawed by its concept. Oxygen tanks don’t last as long that deep in water.

It’s no Jaws, being more similar to staring at Blake Lively’s ass in the Shallows. 47 Meters Down relies on suspense of the situation and the jump scare. It does manage to build some suspense in its predictability. The jump scares also work for the most part. You get what you’d expect from this shark film, with the addition of a twist ending that may make audiences angry. Much like his previous film The Other Side of the Door.