Review of "Rose and Viktor: No Mercy" by The Headless Critic 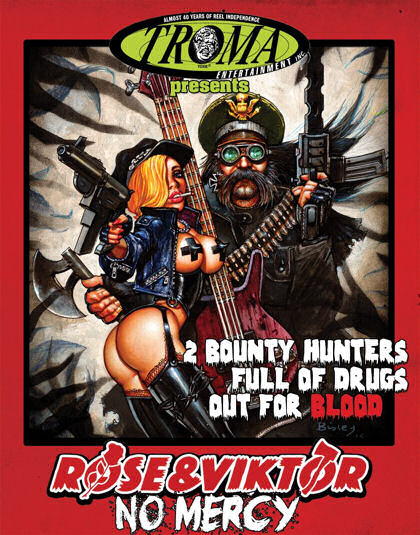 Horrible acting, one liner dialogue, poorly filmed, awful sound quality, grotesquely blunt and absolutely ridiculous to the point of hilarious awesomeness. Rose and Viktor is a drug induced, sex fueled, thrill ride. When the “world’s greatest bassist” Viktor (Jim Schumacher – actual bassist) breaks up with his band, he teams up with teenage runaway Rose (Mercedes the Muse – fetish model). The duo form a revenge charged, bounty hunter/mercenary for hire team who have a tendency to punish their bounties by shoving whatever’s handy up their asses. Need help? Call 555-CUNT and Rose and Viktor will show No Mercy in this collage of short story bounties, connected together into a fun thrilled feature.

I can’t remember the last time I saw so much enjoyably bad acting. The acting is helped by dialogue full of comically corny one liners. The one liners are barely heard at times due to the films sound quality which mirrors that of a 70’s porno. The film quality is even worse mirroring a sexploitation movie of the same era. Shaky cam and possibly a legitimate camera from the 1950’s make up an inconsistent mix of cinematography. All of this is set to an odd score which includes Leave it to Beaver style music during it’s most horrendous scenes. What this Grindhouse flick lacks in every aspect of filmmaking, it makes up for by crossing the lines you shouldn’t cross and bluntly going where no film has gone before. Straight up your ass.

This Bonnie and Clyde on acid trip is not for those weak of stomach. I believe it was the films 4th castration that I fell in love. If you don’t mind watching the Pope take it up the ass, then this is the movie for you. “Rule #1: Never fuck, ugly mother fuckers with scarfs.” Rule #2: buy your copy of Rose and Viktor: No Mercy. If you don’t find a copy, “You’re gonna get ass raped you mother fucker.” So “Shut the fuck up and eat”, because this movie “Goes chop suey on your hooey!” It’s so bad, it's good. Good enough that I want to see what adventure Rose and Viktor go on next.