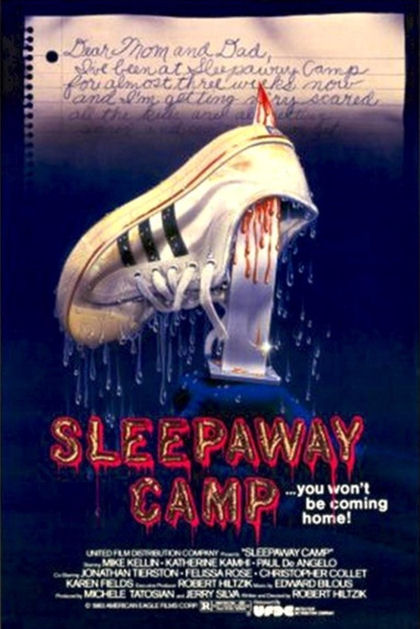 It’s time once again to return to camp. This time, “…you won't be coming home! Traumatized by a boating accident death of her family, young Angela (Felissa Rose) is sent to live with her eccentric aunt Martha (Desiree Gould) and cousin Ricky (Jonathan Tierston). Years later, Martha lets shy, distraught, Angela join her cousin at camp for the summer. Camp Arawak turns out to be “A nice place for summer vacation - a perfect place to die!” Increasingly violent incidents lead to the deaths of campers and a whodunit, murder mystery, in slasher form. “Sleepaway Camp has never been so scary.”

I have very few weaknesses when it comes to movies but two of them are 80’s slasher movies and camp movies from any time. I hadn’t watch this cult classic camp slasher in nearly two decades. I don’t remember the majority of the acting being so over the top. Child actress Felissa Rose easily stands out as the best performance as the sullen character Angela. She manages it with little dialogue in her tormented lead role. “If she were any quieter, she'd be dead!” I mean, “She's a real carpenter's dream: flat as a board and needs a screw!” Sleepaway Camp has every aspect of what makes 1980’s slasher films so enjoyable. A camp setting, a wonderful score, corny dialogue, bad acting and a wonderful variety of kills. Death by bee hive, multiple decapitations and a curling iron up a vagina really stand out as some horror movie greats. Sleepaway Camp may not be the best quality film to make it out of the 1980’s but it’s definitely worthy of it’s cult status.

An unseen killer roams a camp murdering victims in unique ways. Sounds like Friday the 13th doesn’t it? Sleepaway Camp is the crude, adult, pedophilia suggestive version. “Look at all that young fresh chicken. Where I come from, we call 'em baldies. Makes your mouth water, don't it?” You won’t find lines like that on Friday the 13th. You also won’t find young kids being killed in the more mainstream slashers of the day but Sleepaway Camp provides.

Once you’ve seen the ending of a movie for the first time, there’s no unseeing it. Thirty plus years later it may not have been as powerful as it was in 1983 but even now I thought to myself, “what an ending”. Sleepaway Camp may not be remembered for it’s wonderful acting, or award winning script but it has gone down in annals of movie history. “How can it be?” Because it has one of the best horror movie endings of all time. That ending…