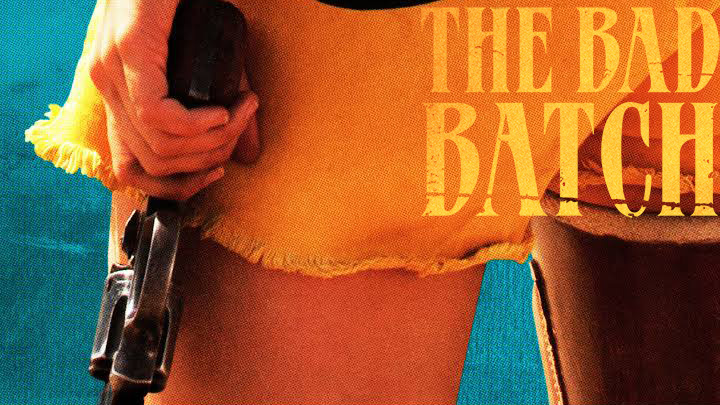 Writer-director Ana Lily Amirpour’s idiosyncratic Bad Batch certainly furthers her auteur status. As with her first film, A Girl Walks Home Alone at Night, Bad Batch’s dialogue is sparse, its narrative even sparser, and its visual metaphor flows in grand supply. It is a striking film, packed with shots of stunning desert, stylized neutral-density-filtered softness, and jittery high-shutter-speed characterizations of actionless action like ominously scored hair blowing in the turning, surrealistic-sound-designed wind. The film relies heavily on tone and a willingness to look at beauty and filth with alternating ogles. For my eyes, it often works, but that willingness does wear out its welcome during several overlong sections. Certainly, anyone looking for taut, psychological terror or threaded, focused storytelling will be terribly disappointed by this film. For those open to the occasional cinematic looming threats of the desert buried in the repetitious howl of the wind, the buzz of the flies, and the ennui of life in a wasteland, there is far more to find worthwhile.

When silent, the performances are compelling all around. The dialogue and explicit attempts to provide expository and explanatory meaning to the compare-and-contrast conceit of the film do fall a bit flat. The characters serve more as markers and symbols for developing the milieu than they do as emotionally driven humans, and that is fine by me as I prefer worldbuilding to trope-based character drama. And it is a compelling, albeit somewhat underdeveloped world. Our disfigured guide proxies for our choice between a too-false life of anti-individual hedonism and a too-real life of individual survivalism. With the omnipresence of rabbits, it is hard to not pigeonhole the film as a blue pill / red pill tale.

I assume there is specific intent in the film making regarding the pill-color choice, but I honestly cannot quite parse the thesis of the film. Is it a love story? Is it a survival story? Is it about the arbitrary meaninglessness of our dreams and the fleeting value of our lives? Does the film suggest that nihilism shall ultimately always rise and conquer? Is the Bad Batch zone really a prison or a libertarian paradise?

Given the unlikability and questionable morality of Suki Waterhouse’s Arlen, it is not clear whether we are supposed to accept her choices as necessary or view her as a morally bankrupt product of a morally bankrupt world. I suppose I did leave the screening with slightly more interest in attending a cannibal cookout than an ecstasy-fueled rave.

And maybe that is the point after all.