Review of "Bonejangles" by The Headless Critic 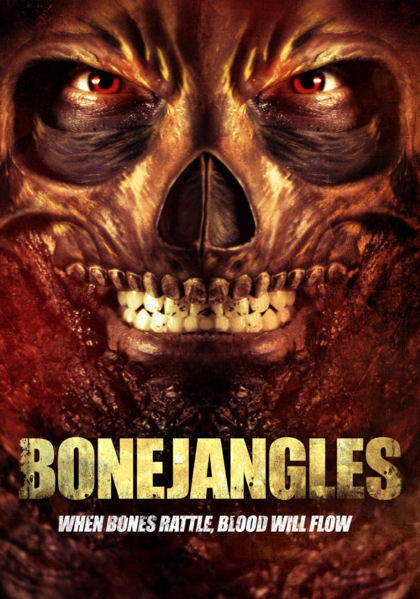 A small town police force captures the world’s most notorious serial killer Edgar Friendly Jr., also known as Bonejangles. Legend has it, Bonejangles has over 100 kills and is unable to die. While transporting Bonejangles to an asylum, the officers breakdown in the town of Argento. Unfortunately for them Argento is a town cursed with the worst STD. A witch burned at the stake over 100 years prior cursed the townsfolks she’d slept with to rise as zombies on the anniversary of her death. Did I say there’s a witch with zombies on top of the slasher movie we already have? “My naughty bits are burning like the fiery pits of hell. It must be witchcraft.”

This isn’t a horror movie but it is a slasher spoof, comedy with a horror theme. The best way I can describe Bonejangles is a sexually frustrated Jason Takes Manhattan style invincible Jason Voorhees, takes on a troop of officers as bumbling as the Police Academy movies. In order to survive the night and save the town, the Police Academy uses Bonejangles to, “Fight the curse with something worse” as the unstoppable killer Bonejangles battles everyone, including the undead. “When Bones rattle, blood will flow.”

An excellent mix of spoof comedy, boobs, blood and kills. It’s also a lot thrown at the screen at once. When I watch spoofs, “It’s true my pecker is flaccid as corn meal mush, every time I look at her repugnant form.” However, slasher movies will always hold a special place in my heart as the first form of horror I was introduced to. While the over the top comedy is the majority of the movie, the slasher film in it is enjoyable. There are also some nice homages in the film. Not only to a carbon copy zombie Jason but also a brief Evil Dead Ash hero and a town bearing the Susperia creators name. I’m sure there are others either forgotten or missed.

It’s hard to judge acting in a spoof because it’s usually bad on purpose. Final girl Julie Cavanaugh, did a good job as Sally. She reminds me a lot of Karen Allen of Indiana Jones fame, in both her looks and perky personality. Reggie Bannister of Phantasm has an excellent role as the father of Bonejangles Edgar Friendly Sr. Even Lawrence Wayne Curry was enjoyable as the most over the top character, flamboyantly gay officer Juan. Some bad CG, did ruin a few spots in the movie but it was limited. Otherwise the film looked great. Spoofs aren’t my genre but those of you who do like it have a bone killer one here. With all the Freddy vs Jason, Alien vs Predator movies out there, who doesn't want to see Jason vs Police Academy? One thing if for certain, “Wee winkie not safe!” with Bonejangles around.