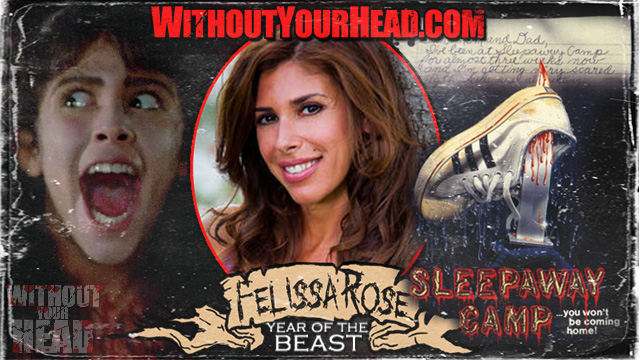 Recap of Felissa Rose on
Without Your Head Horror Radio, 06/22/2017
by Vic Schiavone

Host Nasty Neal welcomed horror icon Felissa Rose, best known for her role as Angela Baker in the cult classic slasher film “Sleepaway Camp”, to Without Your Head Horror Radio for a fun interview that touched upon the legacy of “Sleepaway Camp” and a discussion of her more recent work.

· WYH:  How did your parents feel about you playing Angela in “Sleepaway Camp”?

FR:  “Oh my gosh.  You know what, I have the coolest parents.  My dad has since passed on, but my mom was so amazing about it.  They read the script, and they thought:  This is really fun!  This is a fun movie!  They just figured it was kids at camp.  My mom…she felt like I shouldn’t do the hands in the kill scenes, and that was her only reservation.  Other than that it was really just like chill, and everybody was awesome, and we had the best time like we were really at Sleepaway Camp.”

· WYH:  How did other kids act toward you after the movie came out?

FR:  “I took my whole 8th-grade class to see the movie, and some of them were thrilled by it and thought it was a super cool movie, and then other people; I think there were other kids who were afraid of me.  And there were, you know, there were some bitchy girls because it was 8th grade and we were all like 13/14 years old, so they weren’t so nice, but I think the tougher girls came to my defense and we kind of squashed that.  All in all it was a great experience and everyone was really wonderful about it.”

· WYH:  Did you ever imagine that “Sleepaway Camp” would have such a following?

FR:  “Obviously it was big in my life because I was in the movie and I was proud of the movie.  I thought it was just a cool horror flick that had a lot of interesting elements.  But as far as knowing that there was anybody who even remembered it or knew about it, no; that hadn’t been really part of my world…Jeff Hayes, who runs sleepawaycampmovies.com, he got in touch with me, I want to say like 1999/2000, and he said there are all these fans and people who have made websites loving the movie.  Then we went to the Fangoria Convention in New York City in 2001 I think…It was like standing room only, and we had Robert Hiltzik the director, and a lot of the cast, and it was the best moment.  I mean it was just incredible.  We reunited, and everyone came to tell us that they really loved the movie, and it was great.”

· WYH:  What was it like to make the sequel (“Return to Sleepaway Camp”)?

FR:  “I think it’s so close to what the original was.  It’s different than 2 and 3, which are wonderful; I love 2 and 3…but making “Return to Sleepaway Camp” was super fun because when in your life do you get to go back and redo everything?  And now I was an adult, so I could go to the parties and I could really delve into the character.  Robert gave me a
wonderful opportunity to step in those shoes again, and I loved the movie; I thought it was a great installment.  I know people have trouble; they don’t really like the character, that it was a boy; they felt like they couldn’t really sympathize with that character.  They felt that the original you really felt something for Angela, where as with Alan he was obnoxious and rude and you wanted to beat the ‘crap’ out of him.  But I liked it.  I thought the kills were really great and the director was wonderful and all the characters were cool.  I loved playing my role…I loved Sheriff Jerry.  I was in makeup for six hours a day getting into that character when I worked.  And now I got to do some of the kills, so that was different as well; very different from the first time.”

· WYH:  There are some activists who think that “Sleepaway Camp” is insulting to the transgender community.  Your thoughts?

FR:  “I think maybe the biggest misunderstanding with the film…I think where the problem has come up, is that they’re saying Angela struggled, and then she became a serial killer.  But that’s not at all what happened.  The truth is Angela went through a really tough time with losing her family, and then she was raised by Aunt Martha, and that was a completely separate situation from then going to camp.  Look; it’s entertainment, it’s a movie, she was picked on, and I think it’s a really cool revenge movie.  And I think it’s almost dreamy that all of us who’ve been picked on as prepubescent and teenagers, we can get back at those ‘suckers’; so that’s where the fun comes in.  So I think it’s truly misunderstood and I think Angela is, I believe, a beautiful soul and was unfortunate in the way her journey was depicted by her crazy aunt and her dad and everything that’s happened.  But the killing part of it was just the fact merely that it was a slasher film, and that it’s a great revenge story.  So, I think the two just collided and it was misunderstood.  I’m sorry that they feel that way…You’re not going to make everybody happy when you make a movie, and I wish that they’d understand that it is indeed a film and we’re not trying to hurt anyone.”

· WYH:  You’re going to be appearing in the upcoming film “Death House”.  What can you tell us about it?

FR:  “It’s an…amazing and original movie.  We just screened it at ScareCON a couple of weekends ago and the performances are wonderful.  It’s just totally very science-fiction , very deeply gross - a lot of horrific elements.  I’m really so happy the way it turned out; it’s great.  You have to see it a few times I think because there’s so much involved and so many wonderful actors attached to this.  I think everybody will really enjoy it.”

This interview is available for listening here!
or

Hello, I would like to thank you for sharing this useful material. The information you have mentioned here will be useful. I would like to share with you all one useful source https://writer-elite.com/essay-writing-service which might be interesting for you as well.

Hello, I would like to thank you for sharing this useful material. The information you have mentioned here will be useful. I would like to share with you all one useful source https://writer-elite.com/essay-writing-service which might be interesting for you as well.