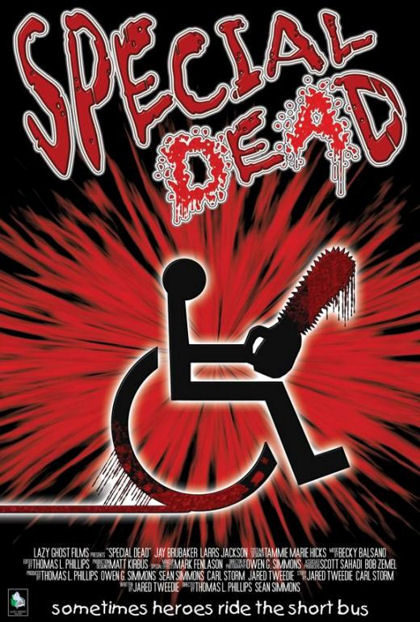 “You ever rode a zombie horse boy? I have, and it ain’t fun.” But saddle up partner and we’ll ride through this review together. If you don’t like my review, “You’re just way more stupided than me.”

What happens when the undead run amuck in a camp for the special ed? Special Dead! Camp Special Dude is a dude ranch for the handicapped. A zombie plague is about to spread throughout the camp. “Sometimes Heroes Ride the Short Bus.” So sit back, relax and “wait for the retard cavalry to ride in and save the day” as this group of handicap campers and their counsellors fight to survive the night. They battle zombies with nun-chucks, chainsaws, love or whatever else is handy. “It’s a campy stampede of blood, boobs and gore, as some very special people show that they can kick some serious undead ass.”

We’re sung into Special Dead by the sweet ballad, “Baby, do me, because I’m the only guy left. Unless you want to bone some disabled guy like Buck” which sets the comedic tone of the film. Special Dead takes the mentality, “We don’t give a fuck, what you think about us.” It’s 100% offensive in every way but I can’t say that I didn’t have some fun watching. All of your worst fears about a zombie outbreak among the intellectually disabled will come true. Over sexed, politically incorrect and downright insensitive, Special Dead chums for zombies, bringing a whole new meaning to the term gum job. As a lead male character says, “I’m like a special Rambo. Like a retarded Rambo.” If you still want to watch this movie remember, “We’re all special people here, bitch!”

The film quality isn’t there. Repetitive punching and stabbings fell flat on the comedic value, leaving them hard to watch. Most of the performances, especially of the intellectually disabled, is quite frankly retarded. The lead male roles are a douchebag and completely perverted disabled character. The female leads are of typical psychotic girlfriend (Amy Wade) and “ if the girl in the wheel chair stood up, she’d be kinda cute” Gia Franzia. The best portrayal of the intellectually challenged is the nearly silent performance of David Reynolds as Isamil “Snail” Ziegler, who proves “zombies are stupid.” Jah Sams steals the show though as Eriq Eldorado, who’s “surrounded by a bunch of crips.” Sams plays another stereotypical role but with good comedic relief. I do have to admit the zombies look good, especially for a low budget film. I will say that it’s the best special people versus zombies movie I’ve ever seen! If you don’t like it, “Whatever, you’re retarded.”