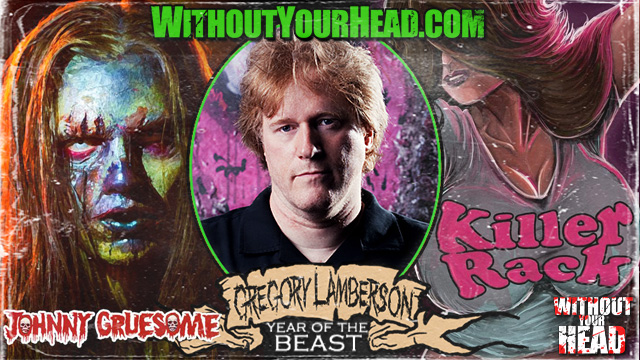 Recap of Gregory Lamberson on
Without Your Head Horror Radio, 06/15/2017
by Vic Schiavone

Host Nasty Neal welcomed American filmmaker and author Gregory Lamberson to Without Your Head Horror Radio.  Among the topics for discussion during an engaging 90-minute interview were his career, his cult classic “Slime City”, and his upcoming movie “Johnny Gruesome” that has been over thirty years in the making.

· WYH:  Your latest movie “Johnny Gruesome” is soon to be coming out.  For people not familiar with the book, what is it about?

GL:  “Johnny Gruesome is a high-school kid named Johnny Grissom, and he’s a heavy metal dude, and a horror fan, and a partier.  He goes out on a drunken joy ride with some of his friends, and he’s really pissed off because he’s been in a fight that day, and he’s been suspended, and his old man is giving him a hard time.  Things get out of hand and one of his buddies ends up killing him, and just as they tend to do in these situations the other kids try and cover it up and make it look like an accident.  And because he’s a horror fan, he comes back as a zombie of sorts to get revenge.  In truth, he’s an angry spirit who quickly realizes that as a ghost he’s impotent to inflict damage on people, and so he possesses his own corpse and puppets it.  And that’s his means of revenge.  He walks around looking like a decomposing zombie, and he has the wisecracks and stuff.  You know, we’re promoting it as based on this book that I wrote but in fact it’s a script that I wrote way back in 1984; it was the second screenplay I ever wrote, right after “Slime City.”

· WYH:  Is the story more serious or does it have a comedic tone to it?

GL:  “You know, I think it’s somewhere in the middle.  When I wrote the character, it was sort of a reaction to all of the slasher films that I was seeing in the early 80’s.  This is 1984, and I thought it would be interesting to take some of those slasher ideas and create a monster with a real personality; sort of like the Universal Monsters but somebody who was a teenager.  And so I came up with this idea that was really original at the time of this wise-cracking character who would make all these James Bond quips and stuff when he killed someone.  And then the “Nightmare on Elm Street” movies came out.  For ten years or so, when I would do with the occasional draft I never let the Elm Street thing sway me one way or the other.  But here we are thirty years later and that has been done to death, not just in all the subsequent Freddy films but also in all the Freddy rip-offs; the character who makes the wisecrack before he kills somebody has just become really cheesy.  So I told Anthony (De La Torre) that we were going to stay away from that and I just wanted him to try and play the character as a teenager who happens to be a monster.  I cut out a lot of the one-liners that were originally there.  But it still feels very much like an 80’s film, and that’s because it was written in the 80’s and because that’s my style of filmmaking.  That’s the only type of film I’ve ever made is the film that feels like an 80’s film.  So even though we have the high tech cameras and it’s got much better production values, I guarantee that when it comes out some of the reviewers will say oh, it’s a very fun throwback to the 80’s.”


· WYH:  What is the status of “Johnny Gruesome”, and what are your plans for its release?

GL:  “It’s finished except for the color grading, which is when the cinematographer goes through it shot by shot and makes sure all the colors are balanced.  We’re really at the point now where we’re starting to contact sales agents and distributors to see who the right one is for us.  So in terms of release, I have no idea.  We’ll see how quickly somebody steps up to the plate that I like that wants it, and if no one does that in the immediate future we’ll see if we get into a big festival…I’m submitting it to a couple of big festivals where distribution could result because of it.  It doesn’t mean I’m going to get into those festivals, and if I don’t I don’t  plan on doing all the festivals I can.  “Killer Rack” I spent six months traveling all over the place with it, and I’m not going to do that again because I think too many festivals hurts a film more than helps it.  I think the distributor wants a film that a lot of people haven’t seen.  It could change, vary from distributor to distributor, but cable TV won’t even acquire a film if you’ve had a cast and crew screening.  We’re trying to get into some of those platforms first, and if we’re not able to then hopefully one of these festivals will premiere us.  Someone’s going to pick it up, and someone’s going to do a good job with it, I just don’t know who or when.”

· WYH:  “Slime City” is probably your most famous movie.  How did it come about?

GL:  “Midway though my first year of college I did a Super 8 film called “Bad Worms”, which really is the genesis of “Slime City”.  Very simple, most of it is on one of the Slime City DVDs, a guy gets some beer that’s bad, drinks it, passes out, while he’s asleep a bunch of cute looking, Kermit the Frog looking, Claymation snakes come out of the beer can and burrow their way into his eyes and in his stomach and he’s walking around not knowing they’re inside him.  That was really the genesis of “Slime City”; the first draft of the script actually retained the words which I ended up ditching eventually.  But before my first year was over I wrote that script.  It was just processing all these different vibes and people around me; it really was just a script about my neighbors so to speak.  And then I wrote Johnny Gruesome after that, and Johnny Gruesome was the one I really wanted to make, but I simply can’t get this budget.  We can do “Slime City” on a super low budget, and that’s the way it went.”

· WYH:  What is it about “Slime City” that it always finds a new audience?

GL:  “Well, part of it is having a distributor that pushes it every few years.  Part of it is having a filmmaker who’s just happy to talk endlessly about this film he made thirty years before.  I have no illusions about its quality.  There was a period of several years where I wouldn’t even look at it, because I see its faults so glaringly, but once I made peace with it and learned to enjoy it, now I have fun watching it with audiences…I think that what works for the film is that number one there is that authentic New York grind to it but there’s sort of an innocence to it along with the sleaze factor…It’s a very weird movie.  When you sit there and examine this back story that I made up of the cultist and the possession, and eating the yogurt; it’s pretty kooky.  And it wasn’t planned out; I wrote that script on a typewriter and I
literally got to the middle of the script and said OK, now I have to explain this, what’s the story, made it up on the spot, and that’s what stayed.”

· WYH:  What is the story about the ending to “Slime City”?

GL:  “I know that that ending is the reason the movie is still around today.  And there was a point - I almost made the movie a year earlier than I did…I had these Wall Street guys who were going to give me $150,000 to make the movie, three times what I did make the movie for.  And everything was going along swimmingly until my lawyer looked at the contract…and said you know, there’s nothing here about creative control or this or that and we have to narrow this contract down.  And sure enough, with my next meeting with these investors, they said, ‘Wow, we love the script; great concept’.  As soon as anybody says great concept, that means something doesn’t work in the script for them.  ‘Everything is great except the best friend gets killed, and we think he’s the most likable character.’  And I said, ‘Well, Alex has to kill the best friend to cross over so the audience will accept that he has to get killed at the end.  He has to do something really bad for the audience to accept him getting killed.’  And he said, ‘Well, that’s the other thing.  We don’t think he should die at the end.’  ‘Well you just spend five minutes telling me how great the ending is!’  ‘Yeah, yeah, it’s great, but we think that love should save the day.’  ‘Love should save the day?’  ‘Yeah, like at the end of “Nightmare on Elm Street Part 2”’.  I said, ‘”Nightmare on Elm Street 2” sucked!’  They said, ‘Well, it did twice as much money as the first one and you can’t argue with box office.’  And I just said, ‘Look, that ending is what this script has going for it.  If you take that away, there’s nothing there.’  And, that was the end.  They didn’t call me back.  I know that if I had made that movie I would have had a bigger budget, I would have gotten paid, everyone would have gotten paid, but we would have had a film that would have been forgotten two years after it was released.”

· The film festival he runs every year in Buffalo, New York (Buffalo Dreams Fantastic Film Festival).
· How he became involved in making movies.
· “Killer Rack” and some of his other films.

For the latest information on “Johnny Gruesome”, visit the Facebook page at   facebook.com/johnnygruesomezombie.

This interview is available for listening at  withoutyourhead.com/viewnews.php?autoid=109582
or