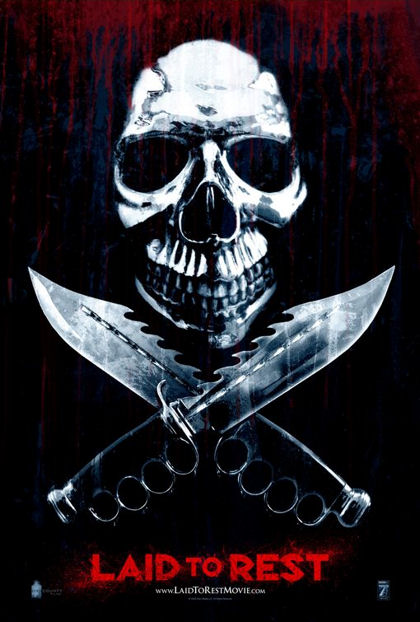 A woman awakes in a casket at a funeral home with no memory of her identity or how she got there. She soon comes face to face with a Chromeskull (Nick Principe) masked killer who’s determined to make her a star as his next victim. The Girl (Bobbi Sue Luther) goes on the run from a masked, murdering, movie maker as she tries to survive the night. Simply put, “He wants to make me dead.”

An excellent beginning, you’re thrown into the middle of a slasher movie as soon as the camera rolls. While this makes for an exciting opening, it also leaves the viewer with no definition of characters or backstory. I don’t think this is necessary in every film but it will leave a lot of horror fans disenchanted. From there the film turns into a chase slasher. It meets its quota of gore body count to satisfy any horror fan. Lower production values only slightly hurt this darkly lit film, while their use of practical effects scores them big points with me. Chromeskull is a nicely crafted killer and he’s supported by an intriguing cast of characters to kill. Bobbi Sue Luther plays a comically confused amnesiac while maintaining the realism of a final girl. There’s a wonderful smaller role by horror icon Sean Whalen, who’s always nice to see in any film. Kevin Gage as Tucker was the most interesting role for me. They took the stereotypical small town, backwoods character and made him the main male protagonist and a hero of the movie.

I enjoy a simplistic story that’s an excerpt from people’s lives without necessarily having a complicated backstory. The unknowing of what exactly is going on in Laid to Rest reminds me a bit of the beginning of Phantasm, before you know what’s happening. It takes time but Laid to Rest does get you invested into its characters and their survival. A murder by numbers, Laid to Rest connects the dots of a horror movie. The lack of excitement and originality may keep Chromeskull from joining the ranks of Jason Voorhees and Michael Myers as the mainstream horror elite. Still a good watch for any slasher fan.

WYH Interview with Nick Principe Chromeskull of Laid to Rest