Review of "Volumes of Blood: Horror Stories" by Jason Minton 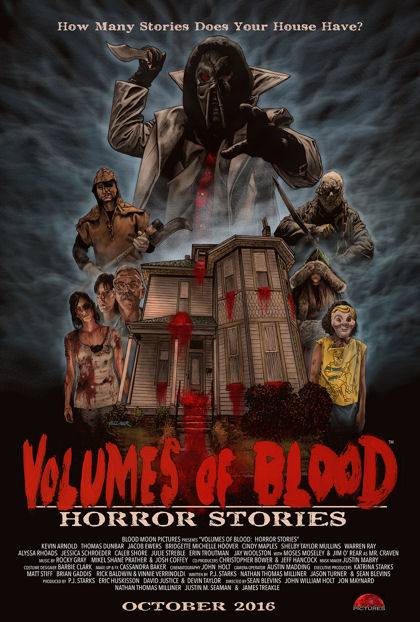 A follow up to the 2015 indie film bearing the same name, Volumes of Blood: Horror Stories is an anthology series comprising seven holiday themed shorts into this harrowing compilation. Two friends watch a set of seven horror shorts from six directors and five different writers in our wraparound scenario.

"Murder Death Killer"
The first segment is a story of hillbilly outlaws Vallie (Barbie Clark) and Dick who have made a deal to rob a warehouse while a generic version of ‘For Those About to Rock’ plays in the background. The couple is told through an elongated monologue that a zombie Jason Voorhees style serial killer Atticus Crow (Aric Stanish) has been killing in the area. Murder by Numbers is the most fun short in the series with the best production values. Vallie is a fun character and we’re given Volumes of Blood in our kills. Directed by Nathan Thomas Milliner

"Trick or Treat"
Home alone after a date on Halloween, Mallory (Shelby Taylor Mullins) is faced with the question, Trick or Treat? She chooses wrong and is stalked by a madman killing people in the neighborhood. Directed by Sean Blevins

"Feeding Time"
Mallory returns from the Trick or Treat segment with a salesman knocking at her door and a monster in her closet. Like a father proving to his kid there’s nothing there, this salesman decides to help the seemingly loony teen, checking her closet for her. His mistake. Directed by John William Holt

"Blood Bath"
Anyone who’s ever tried it knows that shower sex never ends as well in real life as it does on tv. When Andrew (Kevin Arnold) and Sara (Bridgette Michelle Hoover) decide to make a baby on Father’s Day, they come to the same grim reality in bloody form. Directed by Jon Maynard

"Fear, For Sinner Here"
Carol (Jessica Schroeder) is preparing everything just right for Christmas. The house is decorated perfectly, the gifts are wrapped and under the tree. Everything is picturesque. Carol is also about to have a mental breakdown. It’s nothing a couple of candy canes to the tits can’t fix. Directed by Nathan Thomas Milliner

"The Deathday Party"
There’s nothing more annoying than pesky neighbors. When John (Jay Woolston) and his wife Almeda (Cindy Maples) are interrupted on John’s birthday by the pain in the ass neighbors, this birthday celebration turns into a Deathday Party when all neighborly inhibitions are lost. Directed by Justin M. Seaman

Productions values, poor cinematography and bad acting that’s even noticeable through poorly written dialogue, keep some decent stories looking like the indie film they are. A Killer House was the first segment where the cinematography went from low budget to just bad. The wrap-around stories have far worse production values than the shorts. Yes, I said wrap-around stories. There’s a wrap-around story within a wrap-around story in this one. There are movies within movies of this movie. Names and scenes are borrowed from every horror movie you ever loved. It’s done to the point that it becomes slightly annoying. I got to admit that I laughed at some of the childish humor. Things like candy cane and scissor stabbings or defecating on a film poster because you didn't like the movie did make me laugh. There are those and other good things in this film. The stories are there. Key elements of the basics of filmmaking like sound quality really hurt the overall production value which does effect the enjoyment of the movie.