Review of "It Stains the Sands Red" by Jason Minton 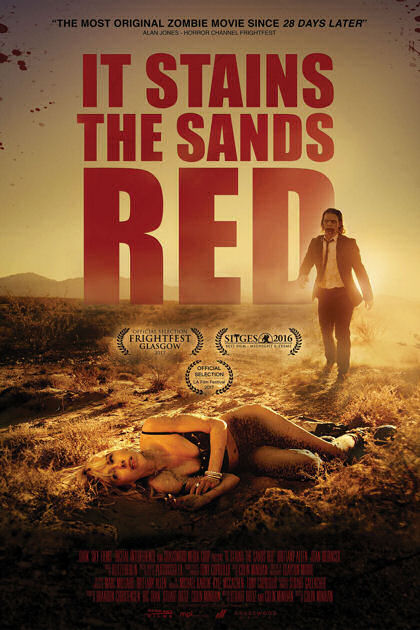 Whoever thought that leaving Las Vegas would be the death of you? Professional douche-bag boyfriend Nick (Merwin Mondesir) and his stripper girlfriend and deadbeat mom Molly (Brittany Allen), are on their way out of Sin City. When Molly does too much coke on the drive out of Vegas, Nick is at least nice enough to pull over so she doesn’t puke in his Porsche. Pulling off the highway gets the couple stuck in the sand and a dire situation as down the road comes a zombie (Juan Riedlinger). In the throes of a zombie apocalypse an isolated desert may sound like a nice play to be, but not when there’s a zombie after you.

In an era when zombies are overdone more than Vampires were when Twilight was upon us, It Stains the Sands Red takes a different approached to the undead apocalypse. This isn’t just another movie about zombies. I would say it’s more of a movie about zombie. If Warm Bodies was a more realistic zombie film, it would be this movie. I’ve loved zombies since I first watched George Romero’s Dawn of the Dead and even I am a little burned out on them at this point. I still really enjoyed the simplistic, apocalyptic tale of It Stains the Sands Red.

I don’t know the budget of this film but the quality hits every mark of a studio production without losing its soul as studio films often do. Written by The Vicious Brothers and directed by Vicious Brother Colin Minihan who cut his teeth on movies like Grave Encounters and Extraterrestrial. For me this is by far his best production. My only complaint may be the double ending. Otherwise he’s really showed us how much he’s matured as a filmmaker, stepping out of the big budget limelight and producing a quality film.

This isn’t a blood and guts zombie movie. Though some gore is provided for your enjoyment. It may be a little too slow for some horror fans. The real star of the production is its performances. Riedlinger is excellent as the appropriately named Smalls. Even smaller roles by Merwin Mondesir are played well. Brittany Allen’s performance as Molly is what really makes this film. When we first meet Molly, she’s a less than desirable character. I don’t know that I have a dislike more than a woman who wears cheetah print, stepping out of Vegas looking like she just came off a street corner. By the end of the movie, her strong performance won me over. Not only into liking the character but she’s also a huge reason to like the film as a whole. This movie is definitely drama first and horror second. With a small cast of twelve, the body count doesn’t rise too high. If you want to see a good, simple story, that’s performance based, this is your movie.