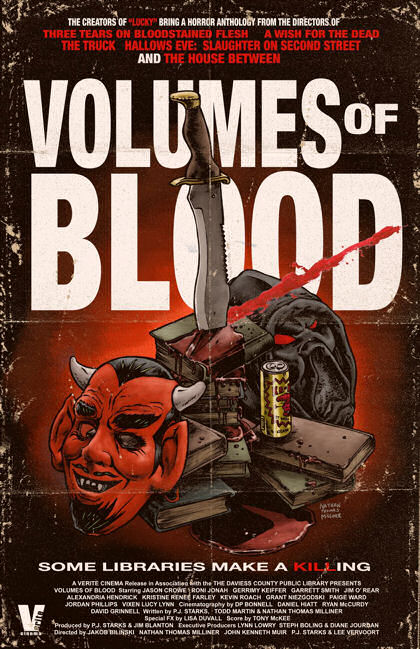 Four friends gather at the school library on Halloween night. Each student comes up with a different story set in the library, trying to create a new urban legend. We’re given four tales of terror to titillate your need for blood. “Some libraries make a killing!”

Murder Death Killer 3
A short, short before the shorts. I was questioning the casting of a balding man as their youth but this story turns out to be more of a spoof than the classic horror tale it first appeared. This short is a tone setting segment for the comedic value of the rest of the film.

That’s a Wrap
From there we enter the opening of our wrap-around story. Volumes of Blood takes us to school and then assigns homework which makes up our four main fables. The opening wrap-around is a college professor assigning work to his students. The return wrap-arounds are four of those students meeting in the library, trying to make their own urban legends.

A Little Pick Me Up
The first fable is one any college student can relate to. Lily (Alexandria Hendrick) is cramming late in the library, trying to stay awake. A stranger approaches her with his unreleased energy drink that he guarantees will keep her up without the crash. Every girl is taught to be suspicious of accepting drinks from those you don’t know. Eventually Lily gives in to tired temptation, accepting the sealed drink. I’m not sure if this urban legend warns against accepting drinks from strangers or the dangers of energy drinks but this short goes out with a Ka-Pow!
Directed by Lee Vervoort

Ghastly
A night shift library clerk gets a book returned that won’t seem to stay on the shelf. Aisle to aisle the clerk is haunted by the book that won’t stay put. “Sometimes you can’t keep a bad book down.” Little does he know it’s not just a book following him tonight.
Directed by P.J. Starks

13 After Midnight
“Do you like scary movies?” Sidney (Paige Ward) doesn’t, but she does like to study and she likes her jackass boyfriend. Sidney has the connections to be allowed to stay after hours in the library to study for a test. After falling asleep, she awakens in a darkened library with an even darker secret. He who walks behind the rows of books shall make himself known to her tonight, but will it be too late?
Directed by Jakob Bilinski

Encyclopedia Satanica
As librarian Paige (Kristine Renee Farley) closes the library, she checks in a different kind of encyclopedia. Feeling guilty over the recent loss of her boyfriend, Paige thoughtlessly wishes upon the Encyclopedia Satanica which is supposed to hold the power to let the living speak to the dead. This satanic tale teaches us to be careful what you wish for. Sometimes you can’t take it back.
Directed by Nathan Thomas Milliner

Production values are low and with the exception of a few of our female leads, the acting isn’t the best. Some of this is done intentionally for humor while others are just victims to low budget indie filmmaking. The shorts get increasingly better from the opening till the final urban legend. The stories are there. The stories are humorous. Most of the films fail to capture suspense to be scary. I did laugh at least once in each segment and they do provide the blood.

The one exception to this is Encyclopedia Satanica which is a straight up horror story and a great way to finish the film. That being said, the filmmaking ending we were given was a little too self-aware for me. Coming up with creative ways to kill off your crew might be fun but I feel the movie would have been better off with the end cut from their runtime and our urban legend telling library students ending the film. There’s one too many wrap-arounds in both Volumes of Blood for me.

We’re given a classic horror story spoofed, a gory short, a cautionary tale, a ghastly ghost story, a creature feature with a twist and a demonic recollection. It’s a well-rounded anthology and I’d like to see what these filmmakers can do with better production values and budget.