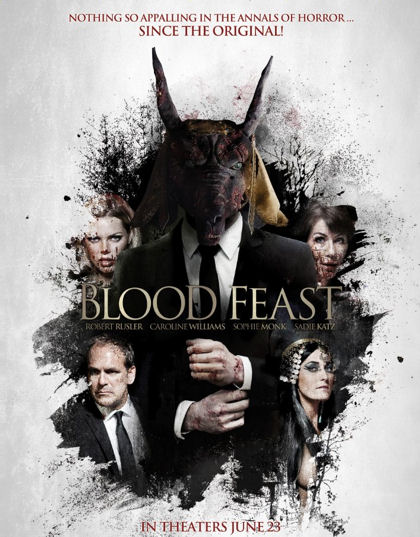 The Ramses family has moved from their life in the United States to France. Fuad Ramses (Robert Rusler) and his wife Louise (Caroline Williams) and adult daughter Penny (Sophie Monk) run an American retro diner in the suburbs of Paris. Fuad has taken a night shift job as a museum watchman to offset the lack of interest for an American restaurant to the Paris locals. Repetitively drawn to an Egyptian exhibit at the museum, Fuad is seduced by the Egyptian Goddess Ishtar (Sadie Katz) who speaks to him in visions only he can see. Fuad also just dropped his prescription medication down the sink. Fantasy meets reality as Fuad slips into insanity on a murderous, cannibalistic killing spree that serves up a little more than your typical meats to the unsuspecting Paris population.

It’s hard to follow a popular original with a remake. It’s even harder to successfully remake an iconic horror film that is considered to be the film that established gore as a genre. Blood Feast 2017 has a task on its hands. The original film by the “Godfather of Gore” Herschell Gordon Lewis who has a cameo in this movie, was a genre trend setter. It was edgy to the point of absurd, breaking barriers and getting banned on its route to becoming a beloved movie by the horror occult. Years after “torture porn” became mainstream terminology for a class of films found acceptable in theaters; the genre Blood Feast created has now become so accepted in society it would be nearly impossible for any remake to recapture that originality or elite status in the annals of horror history.

What we are given is an artfully made, cannibal film that has more class and gore than even Hannibal Lecter could achieve. The modern day Blood Feast starts slow. It’s captivating and methodical. The films descent into insanity is enjoyable ride. By the end of the movie, what started as arthouse shows signs of the campiness of the original. It’s a different take while still paying homage to where you came from meshes well.

Robert Rusler is absolutely amazing as Fuad Ramses. Gorehound or not, his performance alone is worth watching Blood Feast for. German director Marcel Walz does a nice job hinting at a past with why the family moved to France, leaving a timeline open ended to the viewers’ perception. Walz took a cult classic that was campy, with little production values and flipped it into a nicely crafted, beautifully shot film that only comes out as campy at the end. Not since the reboot of Star Trek have I seen a reboot crafted as thoughtfully. It may not be the trendsetting gore of the original but the gore they did was done well. I felt the ending was a little abrupt at first but on reflection feel it was perfect. Realism sets in on the insanity, fade to black.