Review of "The Mason Brothers" by Jason Minton

Production by: KS Pictures
Distribution by: Adler and Associates Entertainment 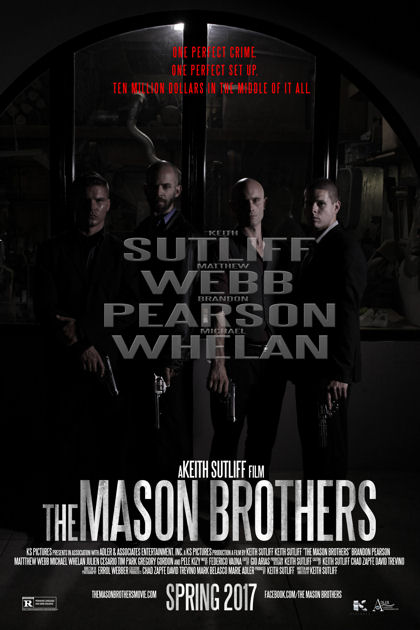 The Mason Brothers are skilled bank robbers, who just got out heisted. The three brothers Ren (Keith Sutliff), Jesse (Brandon Pearson) and Orion Mason (Michael Whelan) are joined by their partner Gage (Matthew Webb) on a ten million dollar heist. “No heist ever goes according to plan.” When another group attempts to do the same job at the same time; the two groups of outlaws clash, leading to the death of one of the brothers. Held up in a safe house the band of thieves attempt to make sense of what happened and figure out who took their money and killed their brother. Was one perfect crime, one perfect set-up?

Admittedly inspired by movies like the Untouchables and Reservoir Dogs, I don’t have any issues with films being inspired or similar to other movies as long as they’re entertaining. Any fan thinking of viewing, know that a Reservoir Dogs style story on a budget is what you’re going to get. This isn’t an action film or even a film with action. Much like the aforementioned inspirational movies, it’s very much a dialogue, situational and acting based film. I firmly believe low budget movies should rely on their scripts and performances and not try to do too much. For such a simply filmed, simple story, The Mason Brothers is missing that quick witted dialogue that made Reservoir Dogs so great. It’s missing that brief moment of action that makes the long wait to get there worth one’s while. It’s missing the big reveal of the Usual Suspects.

Renaissance man Keith Sutliff took on every position imaginable in this low budget crime, thriller. Writer, director, actor, producer, editor, casting agent and production manager, The Mason Brothers is definitely Sutliff’s vision come to life. All of this and it’s done by a first time feature director. It’s admirable what Sutliff accomplished. He has a nice looking, professionally shot film. The dialogue isn’t the most realistic. It felt like the words that were supposed to be in a movie instead of anything inspirational by the moment. There were no horrible performances. The close up of their torture victims face was even a powerful scene that got across the pain he endured without showing anything besides his reaction. Other performances were just off the mark of realism. Together the dialogue and acting just didn’t come across as believable. The films slow pace never delivers that worthwhile moment, leaving a two hour film lacking excitement. It just doesn’t capture what made both of the films it's inspired by such classics.