Review of "Fate" by Jason Minton

Production by: Treage Productions
Distribution by: Self Destruct Films 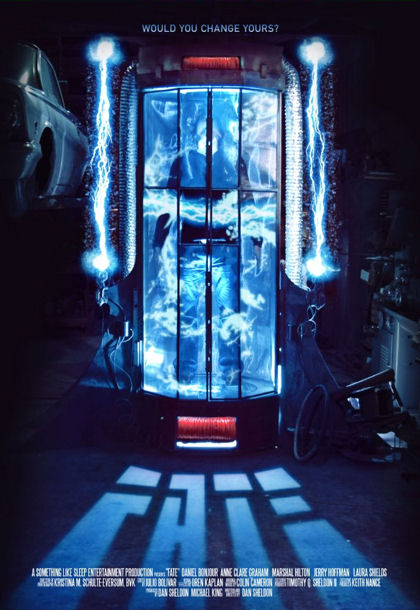 Two scientists are close to uncovering the formula for time travel. With government agents watching them closely, Connor (Daniel Bonjour) and Jonas (Jerry Hoffman) try to keep their work as secretive as they can. On the brink of discovery, Connor has neglected his fiancée April (Anne Clare Lush). Having not seen Connor enough, April visits him at work. She sees his lab assistant Julia (Laura Shields) kiss him. She doesn’t see that it was done against Connor’s will. Distraught, April is distracted and doesn’t see the car coming that kills her. Even though a year later the government has shut down their time travel project, Connor enlists his partner Jonas to continue their research so he can travel back in time and save his fiancée’s life an hour at a time.

If ABC Family and the Syfy channel had a baby, that’s the network Fate would belong on. Shot like a television series, it’s filmed well but looks more like a weekly episodic than it resembles anything seen in theaters. The story is one part Groundhog’s Day mixed with two parts Sliders. The acting level varies. Most of the main cast does well, but some of the supporting characters are excruciating to watch. I kept expecting Fate to reveal itself as a faith based film. For the record, it never does. I don’t think I was the target audience for this film. This Sci-Fi, romantic, drama isn’t for the horror fan at heart. This is more of a family, sci-fi movie and may find a more loving audience there. A middle-aged man rolling around in a wheelchair did remind me a bit of the Rocky Horror Picture Show, which I did enjoy.