Review of "Playing with Dolls: Havoc" by Jason Minton 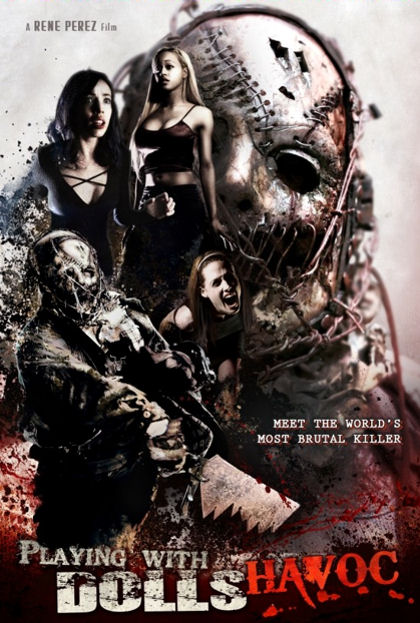 Timothy (Kyle Clark) gets the surprise of his life when he goes to meet his girlfriend Mia (Jade Ellis) at his secluded cabin in the woods, only to find both his wife Sara (Nicole Stark) and girlfriend are both there. That isn’t the surprise though. Serial killer Havoc has escaped his prison and has decided to take up residence in their cabin as well. It’s time to Play with Dolls.

The big knife and killer mask are back and they’re better than ever. This is the third installment of the Playing with Dolls series from writer/director Rene Perez. This is the best in the series. It’s the Playing with Dolls film I’ve been waiting to see. The gore comes out for the third film. Mad millionaire the Watcher (Richard Tyson) from the previous two movies takes a backseat in the third installment. Our commandos in the woods are still there. I don’t know the fascination with this aspect of the series but the script is still a lot simpler, focusing mostly on Havoc and his victims. I won’t say the acting is good but it is remarkably improved over the previous two films. The women in Playing with Dolls: Havoc are more than a set of breasts.

There’s still room for improvement in the Playing with Dolls series. Part three renewed my fascination with the interesting killer Havoc that was nearly lost in the previous edition. This film is noticeably improved over the others. Hopefully any audience the series has found hasn’t given up. After this film, I would like to see what Perez can do with a quadrilogy.