Review of "Truth or Dare" by Jason Minton 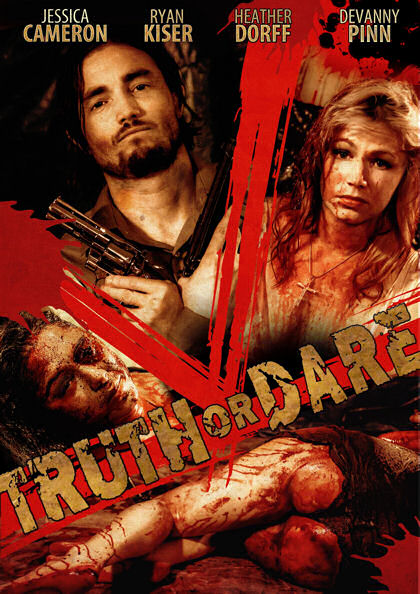 Six college friends found fame on the internet making Truth of Dare videos with violent outcomes. Their semi-real reality show Truth or Daredevils earns them a crazed uber fan Derik (Ryan Kiser). During a Q&A session on a television talk show, The Truth or Daredevils group mock their biggest fan Derik, pushing him over the edge. Their 15 minutes of fame may be the death of them. “It’s not just a game anymore.” The camera rolls run red as torture ensues into a gory mess of a movie.

What do you choose? The truth for those who don’t want to be tortured to death, unveils secrets so shockingly dark, torture might have been a better alternative. A child rapist, cheating partners and a woman who was born a man are just a few of the big confessions that are a little too outrageous to shock viewers. The dare is a torturous bloody mess of stabbings, nipples being cut off, Russian roulette and so much more gore.

Finished in 2013, Truth or Dare just now seems to be getting picked up for distribution. It’s not uncommon for low budget films to set on shelves for a while but four years isn’t standard practice. Actress Jessica Cameron makes her directorial debut, having co-wrote the film as well as being one of its stars. Cameron throws buckets of blood at the screen. Enough to please any gore hound. Perhaps this is why it took so long to find distribution.

Here’s the truth about the film. It’s at a disadvantage in concept, creating six highly unlikable characters that are all just a little too full of themselves to make the viewer care. Then they sit around in a circle torturing one another to death at gunpoint. I absolutely love the idea, one upping the subtle hit You’re Next on the gore scale but the overall premise isn’t realistic. Here’s the dare of the film. Ryan Kiser’s performance as a crazy super fan is done well. You can see the demented behind his eyes. I try not to dissect acting in horror films too much unless they want to be taken seriously. In this films case, the rest of the acting is bad enough to ruin a movie. In a movie that’s based on torture, good reactions are needed and Truth or Dare doesn’t deliver. What it does deliver on is torture. So what’s the dare? I don’t know there’s a horror fan out there that likes gore enough to sit through these performances but I dare you to try.