Review of "A Ghost Story" by Jason Minton 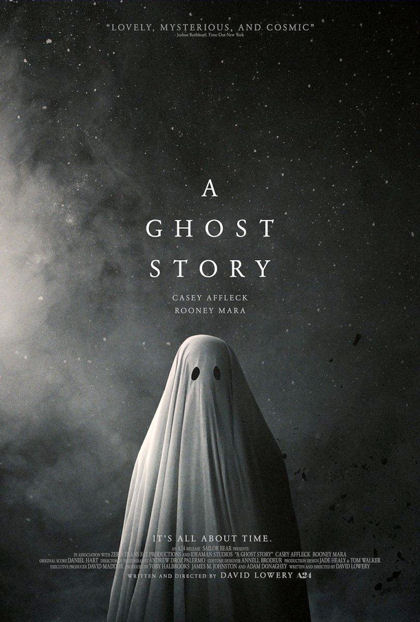 In a “singular exploration of legacy, love, loss and the enormity of existence”, a recently deceased ghost in a white sheet returns home to try and reconnect with loved ones. It’s a spiritual journey through the afterlife, covering the power of love, death, questioning the meaning of our little existence in the world and what happens to all of that when we die. As one character says, “We build our legacy piece by piece and maybe the whole world will remember you or maybe just a couple of people, but you do what you can to make sure you're still around after you're gone.”

A different kind of haunting, this is no horror movie. It is a dramatic, romance that questions the afterlife in a ghost theme. There are few films released that are a true cinematic experiences outside of the now common 3D. Recent movies have had special 70mm framing, there was a drive-in style double feature release and black and white or chrome re-releases. Those are few and far between. A Ghost Story is visually a cinematic treasure. Its 1:33 ratio framing with rounded corners may appear to an indie film novelty act, but really draws the viewers’ attention to the screen. It brings the feel of a home movie found in an attic, without losing picture quality. The films visuals are offset by an excellent score, setting a far deeper and exciting tone to a movie with little dialogue and long shots of no on screen movement.

“A writer writes a novel, a songwriter writes a song, we do what we can to endure.” Some will find this a well written, methodically paced, indie treasure. Others will find it hard to endure. There’s no questioning writer/director David Lowery crafts an amazing, realistic love between Casey Affleck and Rooney Mara who plays our couple C and M in the film. They capture a love Hollywood romance movies should aspire to. There’s no questioning Rooney Mara’s performance is award worthy whether the system ever recognizes it or not. There’s also no questioning that some people are going to hate this film.

Lowery sets up a love story far more powerful than the 1990 hit Ghost. He wasn’t content on making a simple romance movie, striving for something far deeper. A journey through the afterlife sells less tickets and its abrupt ending, a growing trend among indie films, will leave a bad taste for many viewers. Long shots that evoke emotion and anticipation will be lost on those who happily only watch the spoon fed Hollywood norm that’s catered to an audience with no attention span. I liked the movie. The scenes between the couple are captivating and realistic. The beginning of the film is some of the best I’ve seen all year. The interaction between C and M is where all of the drama, the passion and the majority of the interest is. When Rooney Mara moves on and our story evolves into an after-life exploration over the captivating romance it’d created, I didn’t find it as appealing. I highly recommend indie film lovers everywhere seek A Ghost Story out in theaters. If you read this review and still want to see it, it’s a wonderful theatrical experience.