Review of "The Dark Tower" by Jason Minton 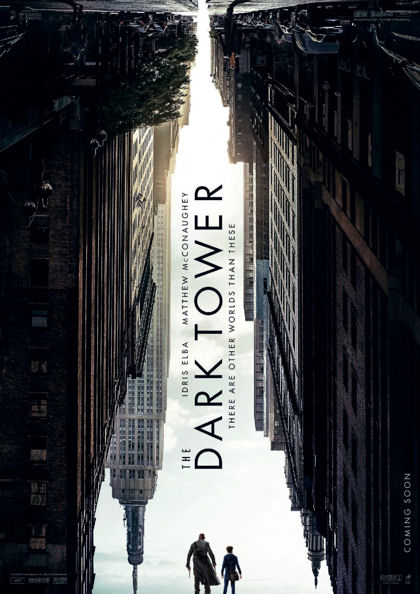 “The Man in Black fled across the desert, and the Gunslinger followed.” Young Jake Chambers (Tom Taylor) is haunted by such dreams that are more than normal nightmares. He isn’t sleeping; he lashes out at school and seems to be going through more than other kids his age. Jake’s dreams show themselves as reality, opening up new worlds to the boy. Worlds where the Man in Black (Mathew McConaughey) of magical powers, is using children to try and topple a Dark Tower that holds the universe together. The Man in Black is chased by the last Gunslinger Roland Deschain (Idris Elba). Roland is hell bent on getting revenge against the evil wizard. Worlds collide and young Jake ends up in the middle, trying to save the universe, trying to save the tower.

If I'd never read the books... All the movie making basics are there. It’s an excellently acted film, with exceptional CGI and on a budget lower than many studio films that produce worse. The story isn't too different than Harry Potter. A little boy’s life is opened up to another world he never knew existed. Finding out he has powers, he helps the good guys in their struggle to fight the bad guy and save the world. Things do jump around a bit and besides our lead three characters, no one else in the film is explored enough to develop much depth. You can tell there’s more going on than the movie explains. The runtime is a shorter than would be expected and it felt like there was more story that just wasn’t covered.

Having read the Dark Tower series... They took Stephen King’s self-proclaimed Lord of the Rings and gutted it, removing the very essence of what it was about. Not knowing the Dark Tower, the movie looks fine. It has that dark look and feel of a Hunger Games or Harry Potter. Knowing the book series, King’s creation was glossed over with what is thought of as modern day movie cool. Stephen King created a Spaghetti Western look, with a Lord of the Rings journey and a Sci-fi horror mix with King's own spin. What we were given by Sony Entertainment was another movie that could be a spin-off of the Hunger Games or Maze Runner. The Spaghetti Western look is traded in for a near steam punk modern. The hip cowboy clothing is the Anti-Christ of what was originally created. Their Lord of the Rings journey was about a slow, long, journey and the bonding of men. It's turned into a face paced ADHD moviegoer mess. The books are a continuing tale where you never know what’s going to happen. In the movie everything is spoon fed to the audience and I didn't like how it tastes.

Walter, the Man in Black is overexposed. In the books he was an elusive man, always ahead of Roland. They must have wanted to get their monies worth of Mathew McConaughey because he’s on screen more than Idris Elba. Roland Deschain is supposed to be a mix of Clint Eastwood and Stephen King. Elba does an adequate job and is likable in the film, he just doesn’t capture the essence of Roland. He’s portrayed as a character that would more likely come out of an Underworld movie than he would have come out of an Eastwood western.

Movies rarely live up to their books and usually just get my blood pressure high when I watch them. The genre of the book series is a Western, Sci-fi, Horror, Drama. The genre of the movie is Sci-fi, Action. They took four things from the King books. They took the three main characters and the Dark Tower itself. Everything else is Sony’s creation, borrowing from the books as needed. I’m not going to blame the director because I know this movie is a product of a studio wanting to make a film from a popular book franchise. Sony Entertainment didn’t understand the driving force behind the novels. They didn't understand the driving force behind Roland. He lives to protect the tower at all costs. This isn’t even a factor in the movie. For the big screen they painted a simple revenge tale. The best part of the film is Jake Chambers. If they intend to make a series of movies, they really should have gotten a kid a bit younger to play Jake but Tom Taylor does knock it out of the park. I understand a different version from the books story works within the confines of the universe the Dark Tower series creates. It’s just not what this fan wanted to see.

As a standalone film, if I’d never read the books I’d consider this movie average and lump it in with the Maze Runner, Hunger Games and twenty other movies made recently like that. As a fan of the book series I despise the rapping that was committed of the novels. My rating will fall in between. The Dark Tower staring Idris Elba as the Clint Eastwood inspired Roland Deschain and Mathew McConaughey cast perfectly as the Man in Black. Loosely based on the Stephen King novel.