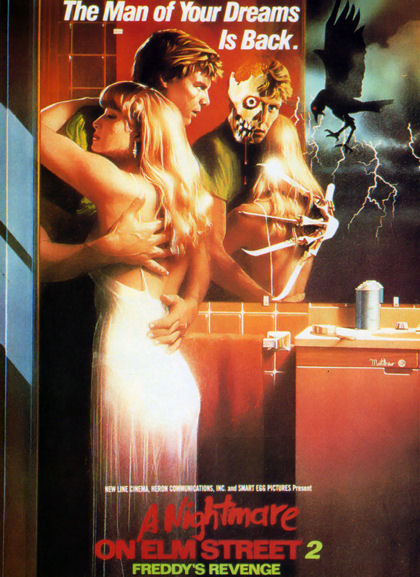 “Someone is coming back to Elm Street.” A new family moves to Elm Street, into the Thompson house. Not long ago the mother of the Thompson family died in her sleep and her daughter Nancy went crazy claiming a man was trying to kill her in her dreams. The teenage son of the new tenants Jesse Walsh (Mark Patton) has begun experiencing nightmares of his own. Jesse is convinced the man of his dreams is trying to enter his body and continue his killing spree in the real world. “The Man of Your Dreams is Back.” Jesse tries to hang onto his sanity and his life as mass murderer Freddy Krueger (Robert Englund) attacks him in his Nightmares, taking over his body and forcing him to kill his classmates.

Freddy’s Revenge has a nice continuation of the original film. Freddy doesn’t capture a lot of screen time which is better for scares. Freddy does capture the body of Scream King Mark Patton who takes the spotlight as a boy torn in two as Freddy gets inside him. Patton does an apt job as the only leading male of the Nightmare franchise, with an underappreciated performance as a teen losing his sanity. The cast in general is loaded with an excellent ensemble of non-leading Hollywood faithful’s including Clu Gulager (Return of the Living Dead, Feast and numerous Westerns), Robert Rusler(Blood Feast, Weird Science), Marshall Bell (Total Recall, Stand by Me, Starship Troopers) and familiar film face of the 80’s & 90’s Kim Myers. The first half an hour of the movie is perhaps the last terrifying and true horror to be captured from a Freddy film for longer than a glimpse. The opening and ending school bus sequences are a thing of nightmares for any school aged child including myself.

The second Nightmare on Elm Street movie gets a lot of flak for its homoeroticism. I never noticed gay subtext in the film until re-watching it as an adult. It didn’t deter my enjoyment of the movie. If anything it added an underlying comedic layer to a sequel that already has comedy value. The film does deserve critique on how big of a drop in quality it was from the first film. Better production values and a bigger budget didn’t lead to a better film. In comparison to some later sequels, it’s actually one of the better movies. Freddy’s Revenge mockingly misses the Wes Craven originality, focusing on the more comedic killer Freddy Krueger and a teenage boy struggling with who he is.


WYH Interview with Mark Patton “Jesse” of A Nightmare on Elm Street 2
https://youtu.be/EKWPw9zVIAU


WYH Interview with Mark Patton “Jesse” of A Nightmare on Elm Street 2
https://youtu.be/HIjusQOCDj4