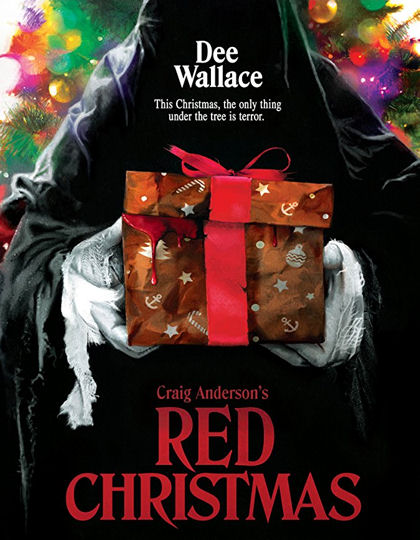 “Christmas can be tricky, but this Christmas the only thing under the tree is terror.” A family gathers at their mother’s remote Outback home for a nice old fashioned family Christmas. This family Christmas is complete with all the squabbling and turmoil one would expect for a holiday gathering. Mother Diane (Dee Wallace) is holding everything together nicely. That is, until there’s a ring at the front doorbell that changes everything. The spirit of Christmas turns deadly when the family takes in the stranger who comes knocking on their door. No good deed goes unpunished this holiday season. Before you can repent your New Year’s resolutions, sins of the past will haunt you.

Red Christmas is the kind of film that makes you look up what else the director’s done because you want more. Writer/director Craig Anderson creates an excellent slasher in the holiday spirit for his first feature film. It’s the best traditional slasher film I’ve seen in years. The body count rivals the presents under the tree with a surprise to be unwrapped in every kill. Horror icon Dee Wallace (E.T., Cujo, The Howling, Critters) gives the performance of a lifetime in this abortion of a movie. That statement is a compliment and one that shouldn’t be taken lightly. Red Christmas is a perfect combination of realistic slasher with comedic values that don’t go too far over the top with a slay full of exciting and fun kills to endure.

This Aussie import would have been a holiday hit at the box office if it’d gotten a wide release in the states. With a cram packed lineup of big budget blockbusters filling our screens these days, every horror fan, especially slasher fans should pick up the DVD/Bluray of Red Christmas for their Halloween viewing list this year. Released on October 17th everywhere. It’ll be an perfect re-watch to get you in that Christmas mood.