Production by: DeInstitutionalized, End of the Rose
Distribution by: Uncork’d Entertainment 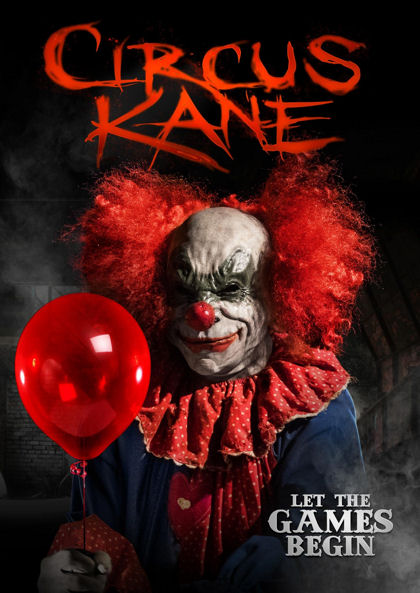 A young woman sits with detectives recounting a night she barely survived. Eight popular voices of the horror community are given golden ticket invitations offering $250k to those who can survive the night in forgotten horror icon Balthazar Kane’s house of horrors. A reviewer, a blogger, a collector, a scream queen, a gamer, a rocker and a teen cover every aspect of the horror community. The group eventually learns this isn’t the easy cash they thought it would be. This horror house has deadly effects.

A circus Saw maze is created by Balthazar Kane (Tim Abell) fitting for a bunch of horror clowns. Bethany creators Zack Ward and James Cullen Bressack write a horror homage, complete with movie quote dialogue you’d expect from such a cast of horror nerds. Syfy B-Horror veteran director Christopher Ray misses the mark on some needed notes of realism. The big reveal isn’t executed in a way that helps the movie. Clown terror comes across too comical for the film to be taken as a legit scary movie. There are some less than stellar performances but nothing worse than acceptable for low budget horror. There were impressive showings as well. Balthazar Kane himself Tim Abell monologues himself into stealing show. There's a nice cameo from Martin Mull. Ted Monte’s over the top characteristics, delivery of movie quotes and general cockiness reminds me of Robert Downey Jr in his role as the collector Big Ed. His performance does not fall flat, even if his character does.

A clown movie coming straight to video just months before the highly anticipated remake of IT being released in theaters did not give me much hope for a quality film. If I saw the cover of this movie, I wouldn’t have given it a chance. Like a clown car, I was surprised by what was inside. They fit a lot of fun(house) kills inside this circus tent for your viewing pleasure. Circus Kane paints its face with blood. If you always dreamed of seeing the little kid from Jerry Maguire (Jonathan Lipnickicki) get his own line used against him, this is your can’t miss movie of the summer. This human head of a movie weighs eight pounds, but it’s eight pounds of lighthearted horror fun. It’s not quality filmmaking but it’s fun and I guilty pleasure enjoyed it.