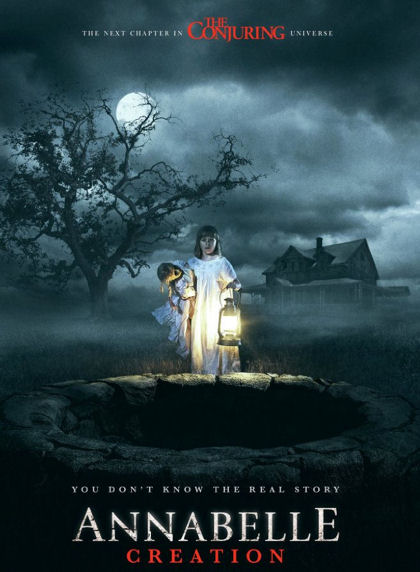 The creation of the evil doll Annabelle begins with the death of a young girl named Bee (Samara Lee). Several years after the tragic of their only child, doll maker Samuel Mullins (Anthony LaPaglia) and his wife Esther (Miranda Otto) open their home to an orphanage, taking in a six orphaned girls and the nun presiding over them. The children quickly begin exploring the mansion they now live in; unlocking secrets the house holds. Some unlocked doors cannot be closed again. The children unknowingly release a demonic presence trapped inside the home. With nowhere else to go the children must face the demon that possesses their new home. All of which seems to center around a little doll named Annabelle.

I should start by saying, while I enjoyed both Conjuring movies I wasn’t the biggest fan of the first Annabelle feature. That should be taken into consideration while reading this review. I know Annabelle has her faithful followers. As the title suggests, this latest edition to come from the Conjuring universe goes all the way back to the creation of the doll Annabelle. This film covers, or at least glosses over everything up to the first spinoff movie. Six orphan girls and the orphanages nun are taken in by the man who created the doll Annabelle. I’m sure the oldest two orphans are supposed to be teenagers but one looks in her early twenties and the other in her early thirties. Little things like that throw you off but this isn’t a film based on its realism. All of the kids do nice jobs acting but the characters don’t come off as kids from the time period this movie is set in. I believe this has more to do with the filmmakers than the actors. I’m generally not a fan of Anthony LaPaglia but he did an excellent job in the film. It’s some of his better work.

Annabelle doesn’t waste time covering much of a story. It sets up scare after scare for its entire runtime. I personally prefer a film that’s story based. The excitement of the Conjuring was the half hour slow set-up before they threw everything at the screen. The Conjuring also captured the feel of the time period it was set in while Annabelle: Creation does not. That being said, Creation doesn’t hide behind trying to make you think it’s real. It knows it’s a movie. It knows, you know it’s a movie. It sets up scare after scare pandering to an ADHD audience. Notes of realism like a man not screaming as his fingers are broken one by one and children exploring instead of running when scary things happen to them; are glossed over for the progression to the next scare. It is refreshing that at least the film knows what it is.

The first half of the film is really intense. It keeps you on the edge of your seat awaiting a scare. Its lack of character depth and unrealistic nature also kept me on the verge of scoffing instead of caring. The first half didn’t lose me though. I went right along for the ride. The second half of the movie went over the top and I was laughing through most of it. Extreme predictability and small, goofy things like hitting a demon in the hands with a flashlight were too much to take seriously. Overall I found it still enjoyable. I liked it better than the first Annabelle film but not as good as either Conjuring. I’m sure Annabelle fans will love this newest incarnation. If you didn’t like the previous movies, this one will probably lose your interest within the first fifteen minutes. It’s definitely a Hollywood, cookie cutter, horror movie that fits the Annabelle mold.